What Happens When RAND Rethinks Its Workspace 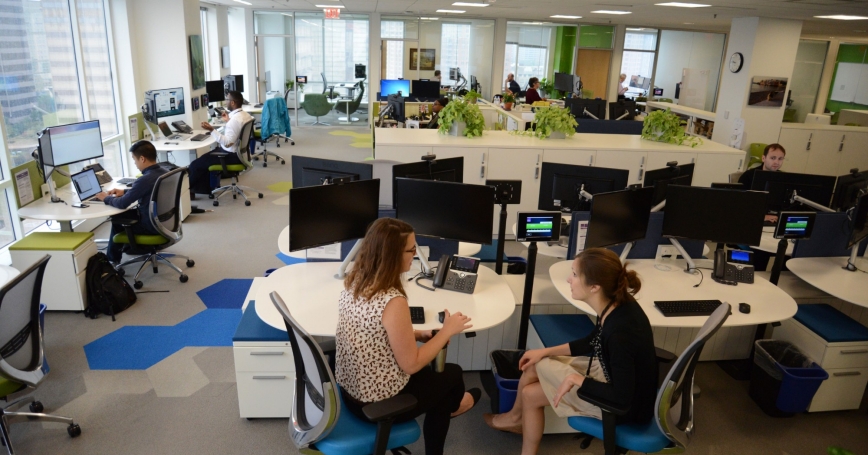 Take heart, cubicle dwellers. Rub your eyes against the fluorescent lights and you will see that the American workspace is undergoing a period of profound change.

More and more, companies are starting to experiment with new ways to make the workplace work better in an economy that increasingly values ideas over tasks. They're breaking down their office walls, scrapping the very idea of a nine-to-five—and yes, even doing away with all those cubicles.

A RAND initiative is putting some of those ideas to the test. It shows how a modern workspace can better serve the needs of employees and create a better environment for collaboration, without sacrificing heads-down solo work. The subject of this pilot project? RAND itself.

In 1969, the British Broadcasting Corporation looked to the future of work and imagined an “automated executive,” alone in his office except for a videophone and what appeared to be a robotic filing cabinet. “No distractions,” the automated executive enthused, “just me and the work, alone and efficient.”

That was the era of the corner office, when your place in a company was directly related to how much space you had when you closed the door. It was followed by a countermovement—the “open office” revolution—as companies tried to remove barriers and maximize efficiency. That particular pendulum swing landed us in the cubicle farm.

Today, the adjective Americans use most often to describe their workplace is “stressful,” one survey found. A Gallup poll released earlier this year found that 43 percent of American employees now work remotely at least some of the time. And sales of “systems furniture”—mostly cubicles—have fallen from a high of $4.9 billion in 2000 to around $2.8 billion today.

People work better the more they interact with other people.

But it's also become clear that putting people back into offices isn't necessarily the answer, either. An increasingly rigorous body of research has shown that people work better the more they interact with other people. One study of pharmaceutical executives, for example, found that their sales improved by 10 percent when they increased their face-to-face encounters with other team members by 10 percent.

Efficient Use of Space?

RAND was once at the forefront of collaborative office design. It built its original Santa Monica headquarters with almost mathematical precision to create chance encounters between people from different divisions. A defense analyst could not get to work without running into an economist or a social scientist.

In recent years, though, its North American offices had come to resemble a more typical American workplace: long corridors of offices interspersed with banks of cubicles. Most employees could close the door and never interact with anyone except by email and phone; the only thing missing was the robotic filing cabinet. 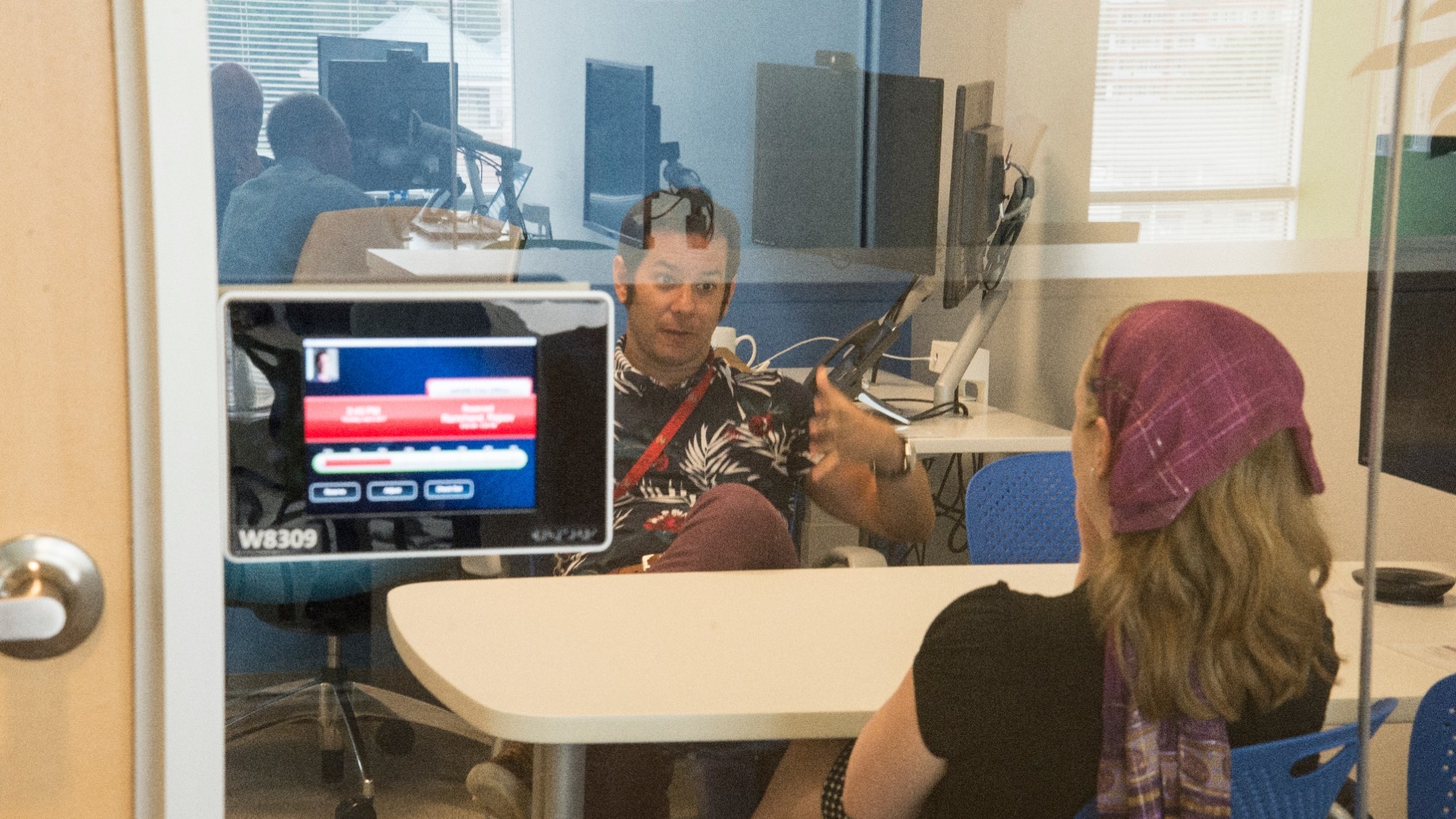 In 2016, RAND decided to rethink one wing of its Washington, D.C., office. And it did it in the most RAND way possible.

It studied employee data and found that, on any given day, 40 percent of its research staff were off-site, their offices empty. It conducted a deep dive into the research literature of office design (sample titles: The Organization and Architecture of Innovation and The Impact of Light and Colour on Psychological Mood). It recruited a test group to work in the new office space for at least six months—and, for the sake of statistical comparisons, control groups from the existing offices.

The new space has the feel of a slightly futuristic library, a quiet, open area of workstations with glass-walled offices along the sides. One of the planning principles at work here: lower barriers so that people can see each other, and they unconsciously lower their voices.

Nobody owns an office here. Most employees reserve their workspace by the day or the week, or just take what's available when they arrive. Only a few administrative staffers have assigned desks.

The glass walls let natural light in but also let people see each other.

Walk through the area, and you might notice that there are no visual dead-ends, no workspace cul-de-sacs, and many different ways to get from point A to point B. The old coffee room is gone, traded out for a café-style area with booths and tables. The glass walls let natural light in but also let people see each other.

The idea was to create a sense of community while also meeting workers where they are on any given day. Senior managers expecting a day of project meetings and phone calls can reserve a private office; a more junior staffer plowing through a 300-page research report can take a workspace in the quiet area instead. And if they're on vacation or visiting a client, there's no office sitting empty. 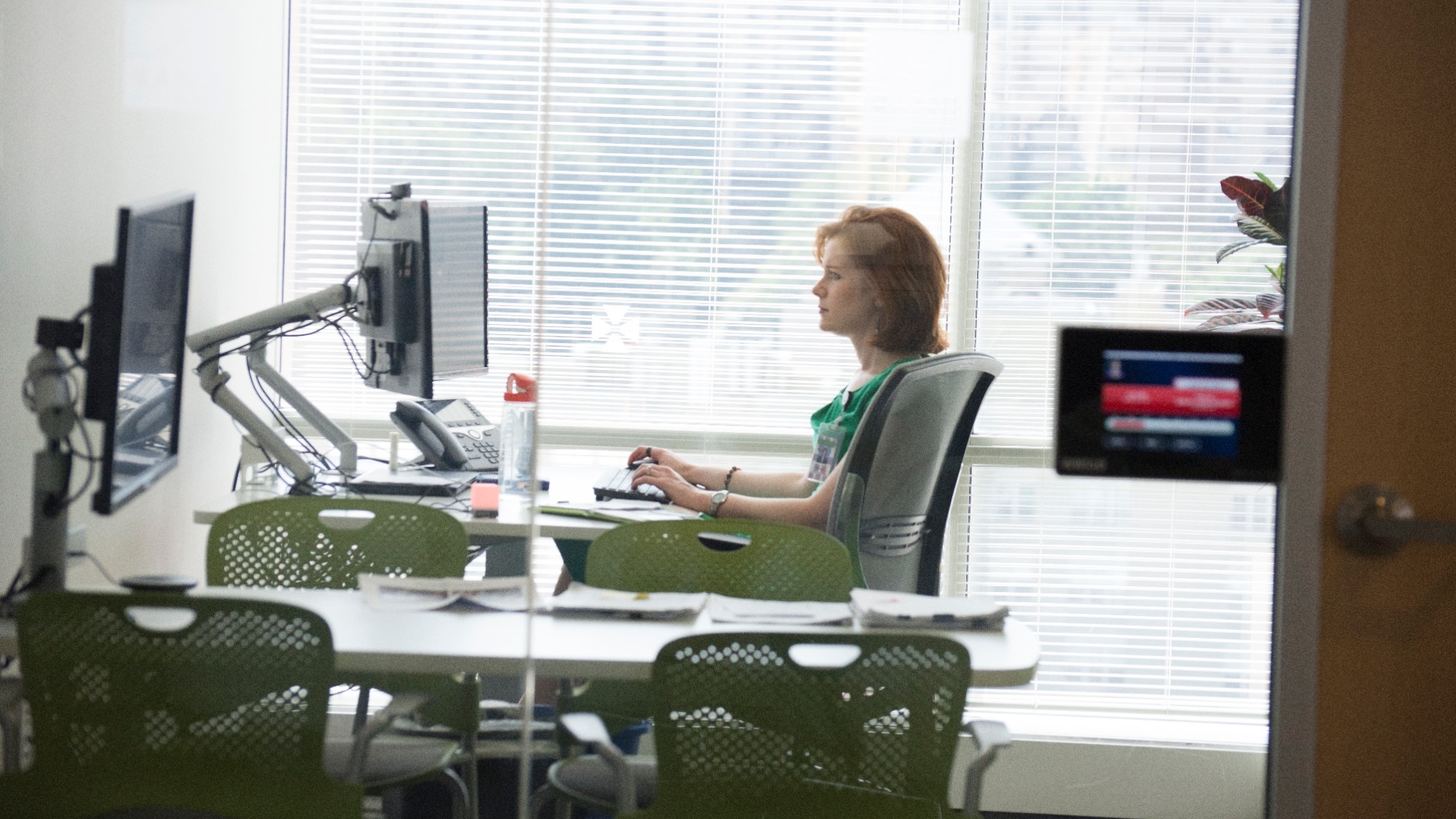 The new workspace cost roughly the same as what RAND would have to spend to replicate its older office design in a new space, said Eric Peltz, the executive director of Research Services and Operations. But it has the added benefit of increasing capacity, from 27 staffers on an average workday in the area before the redesign to 38 in the new space. That gives the area a more social feeling, a community buzz that helps make casual interactions a part of the daily routine.

Using the same square footage of office space, this new model resulted in a 40% increase in average occupancy

“It's a rich mixture of open and closed, individual and group spaces, and people can choose,” said Margaret Gilchrist Serrato, a design architect with Herman Miller who consulted on the project.

“We used to design workspaces by just asking for a head count: 'How many offices do you need?'” she added. “That's not the way to do it anymore. What you really have to find out is, How often are people here, and are they working alone or in groups when they're here?”

The Office Redesign Met Its Goals

This kind of workplace experimentation has always been perceived as a little risky. One paper in the 1970s cautioned that doing away with personal workspaces in particular might “provoke a good deal of fear or even panic” among the workers.

RAND being RAND, it partnered with a team of researchers from Cornell University to evaluate how well the pilot workspace met the needs of the staffers working there—and to publish the findings in a scientific journal. The Cornell team collected survey data on how the new office was performing, conducted interviews with the researchers working there, observed their day-to-day routines, and kept logs of their interactions.

The initial results suggest the redesigned workspace performed as hoped, making it a potential model for other organizations with similar work needs. Around 90 percent of the workers in the pilot said the new configuration supported individual, high-concentration work at least as well as their old workspaces had. The same number said it provided better, or much better, opportunities for collaboration.

Day-to-day headcounts showed that the new configuration also increased the use and efficiency of the workspace—and with it, that community buzz. More than two-thirds of the people working there said they had more unplanned interactions with their coworkers than they did before.

“RAND is taking an exceptionally scientific approach toward this,” said Ying Hua, the leader of the Cornell study and codirector of the university's International Workplace Studies Program. “That's important, because every organization and every group of people is different; there's no ubiquitous workplace solution that works for all.”

There's a broader context to this, and it's been a focus of RAND research for well over a decade. The very nature of work in America is changing, driven by technology but also by tectonic shifts in the workforce. People who once would have left the workforce—older employees, new parents— are now staying in and trying to balance work and life. At the same time, globalization has put ever-increasing value on the production of ideas and innovations.

RAND's workplace experiment—balancing flexibility, collaboration, and individual work—is “entirely consistent with what many companies are experiencing,” said Lynn Karoly, a senior economist at RAND and one of the leaders of its workforce research. “Everything we talked about 10, 12 years ago is now coming into play.”

Only two out of 63 employees requested a transfer back to their old offices when the trial period was over.

RAND now plans to expand its “future workplace” to a newly acquired floor in its Washington office. Of all the numbers it crunched, one in particular stands out: 2. That's the number of employees, out of 63, who requested a transfer back to their old offices when the six-month trial period was over.

“This was a big change,” said Nicholas Burger, a senior economist at RAND who was part of the pilot—and was emphatically not one of the two who left when it was over. “It's very different from the way this office had been managed; it's very different from how other offices are designed and managed. People were understandably nervous about it.

“It may not be a good fit for everyone,” he added, “but I think we've found it's a pretty good fit for a large number of people.”