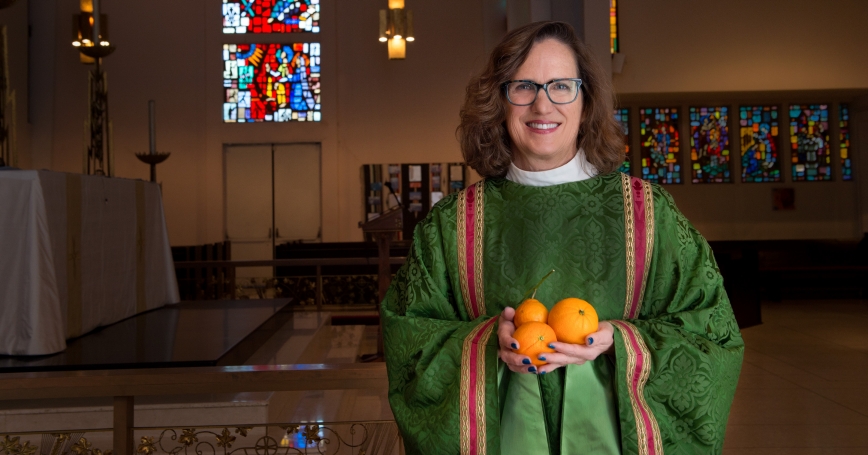 Friendly Friendship Baptist Church shares a busy block of South Los Angeles with a liquor store and a McDonald's. So when parishioners decided to plant some fruit trees there, they meant it as a statement. They were taking back their health.

They hosted exercise classes and cooking workshops. They swapped out the pastries in the fellowship hall for fruit cups. The senior pastor gave up his daily soda habit and lost seven pounds. “It was just a total, all-in effort,” parishioner Linda Hopkins said. “We moved the needle.”

Striving for Justice, Peace, and Dignity for All

In low-income African-American and Latino neighborhoods like South Los Angeles, long shadowed by poor health and chronic disease, the church is one institution that can move the needle. In recent years, dozens of churches like Friendly Friendship have partnered with RAND to confront two of the biggest killers in their communities: HIV and obesity. Their work has provided a model for how health departments, researchers, and faith leaders can work together for the good of the community.

The partnerships are led by Kathryn Derose, a senior researcher at RAND and a specialist in how social ills like poverty and prejudice can poison the physical health of whole communities. She has spent her career working to improve living conditions, and through them health, in places as varied as the indigenous villages of Ecuador and the HIV clinics of the Dominican Republic.

She has one other important qualification for her work with the churches. She's an ordained Episcopal deacon who has ministered to the sick and injured in one of the busiest trauma centers of Los Angeles. She takes her inspiration from the words of the church's baptismal covenant: Will you strive for justice and peace among all people, and respect the dignity of every human being?

“It's really about social justice,” she says. “That's what propelled me into research addressing health disparities, and into a religious service founded on justice. That's where they overlap.

“It's about creating the conditions in which people can live healthy lives. It takes a village, and sometimes more, to build and advocate for those conditions.”

There were, at last count, around 300,000 religious congregations in the United States. That's more than twice the number of cities, school districts, law-enforcement agencies, post offices, and Starbucks locations, combined. They are the meeting places and public squares of their communities, with a legacy of organizing and leading social change. As faith leaders like to say, they have a captive audience for an hour or two every week.

Most already provide some kind of health programming—a blood drive here, a health fair there, maybe a special ministry for drug users or homeless people. But their efforts have too often been piecemeal, treating the symptoms but not the causes, without enough sustained support from public-health agencies. The research base that could help make those interventions more effective is surprisingly thin.

As a deacon, Derose had seen the power of the church to help those in need; that's the job description for a deacon. But she had also seen the challenges that many churches face: limited resources, over-full calendars, pastors working two jobs to make ends meet. That's where she thought her research experience could help.

Churches have a moral responsibility toward the well-being of the community, but they often lack the resources to do it alone.

She knew she couldn't just knock on church doors and deliver a health program. Instead, she brought together a small group of faith leaders from mostly African-American and Latino churches to help develop health interventions that would work in their communities. Their first target: HIV.

It was not what Rev. Dr. Clyde Oden, a leader among the African-American churches, would call an easy layup. The stigma around HIV was so high, especially in the more conservative churches, that people were afraid to even get tested. “It was like we were walking on glass through prejudice, through fear,” Oden said.

Derose and the faith leaders developed a sample sermon that asked people to imagine meeting someone with HIV, and reminded them of the Biblical command to love their neighbors. They trained peer leaders, and showed a short video of a man struggling beneath the plus sign of a positive HIV test as if it were a cross, as people shut their doors to him. When the health department brought mobile testing vans to the churches, the pastors were the first in line.

“Nobody wants to be unhealthy,” said Rev. Michael Mata, one of the Latino faith leaders involved in the study. “We have a moral responsibility toward the well-being of the community. But a lot of times, churches don't have the resources or the background to do it alone.”

When Derose received a federal grant to extend her work a short time later, she went back to the community and asked parishioners, clergy, and public health leaders: What health problem should the church tackle next? The answer she heard, again and again, was obesity.

She brought together health officials, community nonprofits, and more than 60 Latino and African-American churches to make a stand for better health. The plan they developed went first to a small test group of churches. They planted gardens, hosted garden-based cooking classes, and sent out daily texts reminding people to make healthy choices. They brought in mobile clinics to test for diabetes and high blood pressure. They walked their neighborhoods to map the physical barriers to good health—the overabundance of fast food, the absence of any grocery stores, and where a few fruit trees could make a big difference.

The churches that participated saw average diets improve and body-mass indexes fall. Their congregants lost an average of just under one pound, which might not seem like much—except that the intervention ran over the Thanksgiving, Christmas, and New Year's holidays. The people in a control group of churches that did not implement the program gained an average of 1.8 pounds over the same time period.

Churches Are Key Anchors in Communities

Derose is now working on a project to encourage greater park use by churches in neighborhoods with few other exercise options—and, where needed, to advocate for park improvements to better meet their needs.

When you combine efforts with churches, you can really have an important impact on the community as a whole.

“Churches are really key anchors in underserved communities,” Derose said. “They excel at responding to critical needs, and they know those needs in their communities very intimately. When you start to combine efforts with churches, you can really have an important impact on the community as a whole.”

“It's not always easy,” she added. “Those donuts at coffee hour are kind of a sacred thing. And there are much broader forces working against health in so many communities.”

Senior Pastor LaMonte King has seen the impact at Friendly Friendship Baptist Church—and not just from the pounds he lost from kicking his soda habit. A few church elders learned they had diabetes or high blood pressure through Eat, Pray, Move, he says, and have changed their lifestyles to address it. Church youth now sell fruit smoothies for their fundraisers, not cookies and candy.

And every now and then, he'll see someone stop on the sidewalk outside, between the liquor store and the McDonald's, and snap off an orange from one of the church fruit trees.