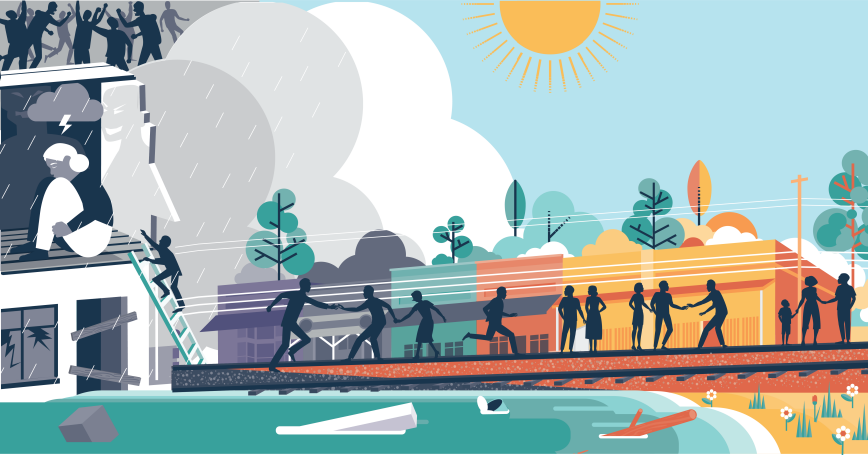 There had been a police shooting, another unarmed black man killed. Andrea Ducas saw the protests on the news, another community in turmoil, and thought of a term from public health: allostatic load. It's the physical cost of too much stress, the toll it takes on body and mind. She wondered: Could we apply that same idea to communities? Could a better understanding of how stress builds in communities, the burden it puts on them, lead to more effective policies to confront it?

Ducas, a senior program officer at the Robert Wood Johnson Foundation, had worked for years with RAND researchers on issues of community health and resilience. She picked up the phone. The result was a new way of thinking about how racism, poverty, injustice, and other societal traumas can cut to the very core of a community.

“The intent here was to create a framework that is informed by a community's past but is also forward-looking, that goes beyond just describing the community,” Ducas said. “Once you crack that code, you can start to say, 'Ok, what do we do about it? What are some indicators that community stress levels are rising? What are some interventions that might help?'”

Generations of Neglect Take a Toll

The sign outside Duck Hill, Miss., describes it simply as “a place called home.” It has one hardware store, one convenience store, a handful of small shops, and 15 churches. It also has a dividing line, Binford Avenue, that separates the black side of town from the white side. In 1937, Duck Hill was the site of a notorious lynching that drew a crowd of 200 spectators.

“That was during my ancestors' time,” said Shernell Everett, who has lived on the black side of town for all of her 61 years. “But we were told about it growing up. It really had the black people very fearful of stepping up, trying to do anything.”

Psychologists and biologists have known for years that prolonged stress like that is toxic to the human body. It alters hormone levels, weakens the body's defenses, and wears a person down even at the cellular level. It's a known risk factor for six of the leading causes of death in America; it also might help explain why people of color die at much higher rates of COVID-19.

Researchers at RAND realized Ducas was right: Toxic stress, or “allostatic load,” could be a useful way to think about what happens in marginalized communities as well. They began pulling together strands of research on community trauma, resilience, health, and vulnerability. They developed a model for how stress can accumulate in a community, generation after generation, an accretion of despair, disinvestment, discrimination, and disparity. Any new crisis—a police shooting, a natural disaster, a global pandemic—becomes a potential tipping point.

Stress can accumulate in a community, generation after generation, an accretion of despair, disinvestment, discrimination, and disparity.

“When you look at the histories that communities have, the traumas they carry, you start to get a better understanding of what they're really dealing with,” said Anita Chandra, a vice president at RAND and director of RAND Social and Emotional Well-Being. “When we look at COVID, for example, it's not enough to say more black people die than white people. You have to look at what is weakening the health not just of individuals, but of communities.”

In Duck Hill, you might start with the roads that flooded during every major storm, the water a foot deep in some places and buzzing with mosquitoes in the summer. Or the boarded-up high school in the middle of town, a monument to Duck Hill's segregationist past. You might look at the lack of public investment, the lack of any real opportunities for youth, the lack of a basic grocery store for miles around.

“The community has just been excluded,” said Romona Williams, whose work with a nonprofit brought her to Duck Hill. “For decades. For generations.”

The Road to Community Well-Being

That kind of chronic stress is not just a corrosive force in communities like Duck Hill, RAND's model suggests. It's also something that can be measured in real time. But it takes more than the usual data points, like unemployment rates or crime statistics. To really understand stress levels in a community, you have to get out and ask residents about their perceptions, their experiences, the stories they tell about the community and the trust they have in it. It requires a deeper appreciation for a community's history, its institutions, its policies and practices.

But it can lead to new insights about what a community needs when it reaches a tipping point. When the researchers looked at case studies of high-stress communities in crisis, they found that some were able to pull together while others pulled apart. That was true even when the researchers compared communities that looked similar on paper. In every case, the one that had stronger social ties, a more-inclusive and responsive government, a community narrative of facing challenges and overcoming them, was the one that responded well and recovered.

To really understand stress levels in a community, you have to get out and ask residents.

“Those are things you can work on,” Chandra said. “They don't automatically eradicate the realities of poverty, for example, but they start to uproot some of the issues when systems feel different for disenfranchised populations. You can actually get in there and build capabilities, versus just mapping vulnerabilities.”

You can, in the words of Andrea Ducas at the Robert Wood Johnson Foundation, start to “de-charge the conversation”—to look at where communities are hurting, and what it will really take to build and strengthen them moving forward.

The residents of Duck Hill might not have expected to have that conversation a few years ago, as they filed into a community meeting room to talk about the sorry state of their roads. But as they went around the room, sharing their hopes for the town's future, the poison of its past kept coming up. It wasn't a pleasant conversation, Shernell Everett said, and not everyone was ready to listen. But it started to bring together the two sides of town, black and white, to talk about where Duck Hill is going, and where it has been. 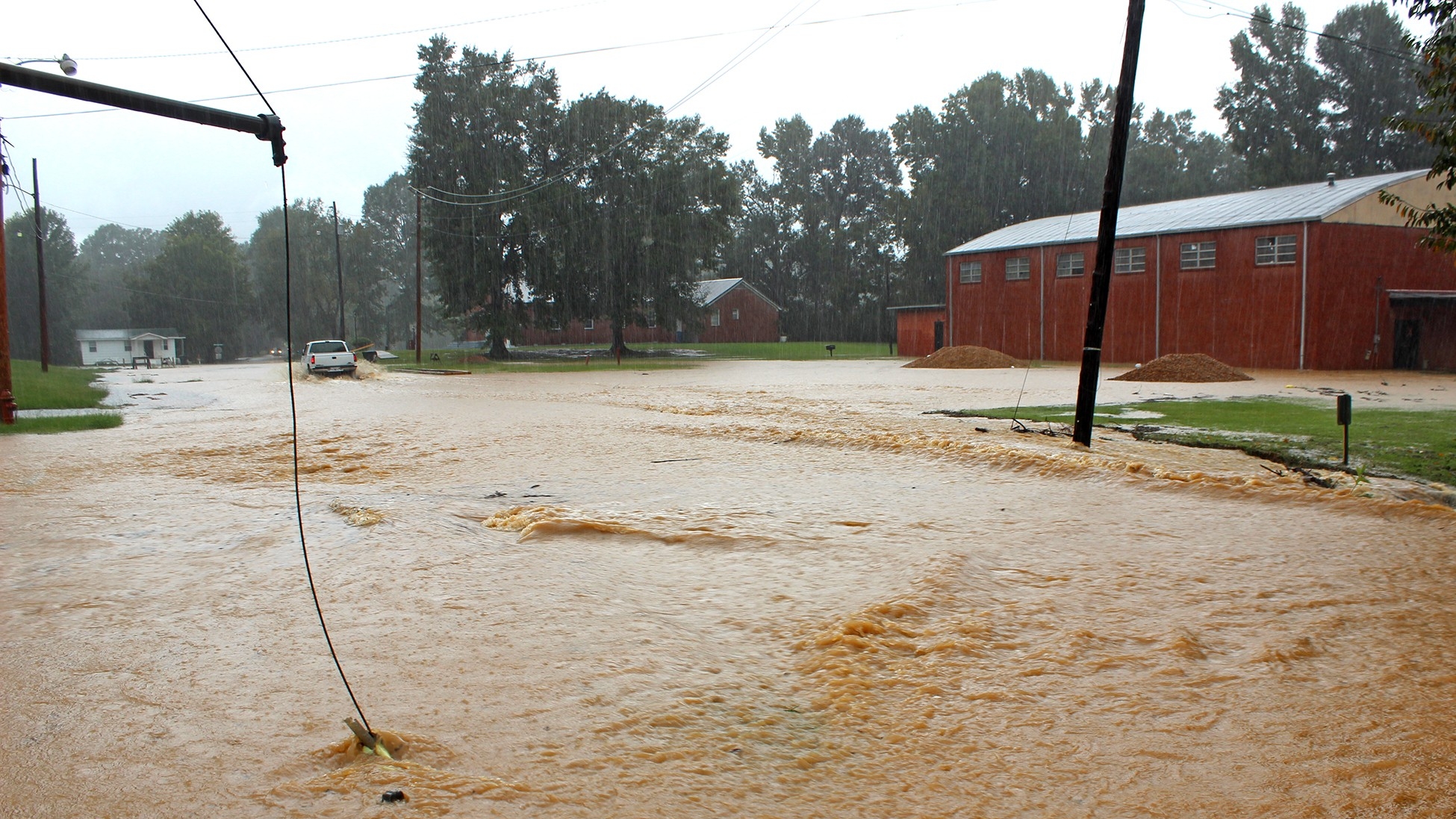 A flooded road in Duck Hill, Miss., before the community received a $300,000 grant from the Achieving Sustainability through Education and Economic Development Solutions (ASEEDS) Initiative. The grant allowed the town to mitigate flooding and begin planning for a more economically and environmentally sustainable future.

The town competed for, and won, a $300,000 grant to mitigate flooding and begin working toward a more sustainable future. It created a program to involve and empower its youth, the Creek Rangers. When COVID-19 hit, residents started a phone bank to call and check on each other.

They're working now to renovate and reopen the old high school as a community center. Early plans call for it to house a small farmer's market, so residents don't have to drive miles outside of town for fresh fruit and vegetables. It will also have space for a museum, to ensure the community narrative provides a full account of its past.

“It's a process,” Everett said. “I'm not going to say our community is perfect. But we're striving, and we're not going to stop. It can't be a black thing, or a white thing. It has to be our thing.”

She's become the driving force of that change, as the newest member of Duck Hill's board of aldermen.