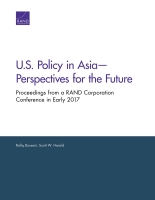 Proceedings from a RAND Corporation Conference in Early 2017

These proceedings summarize the findings of a conference on U.S. policy in Asia titled Pivot to Asia? U.S. Policy in Asia Under the Trump Administration, which was held at the RAND Corporation in January 2017. The conference's objectives were to examine the arenas of U.S.–Asia engagement, provide an understanding of the outcomes of past interaction, and make the case for the terms of future engagement. Conference participants agreed that, under the administration of President Donald Trump, significant changes were under way. While the dimensions of these changes are still emerging, the dynamism of the region and the risks that a lack of collaboration might pose for both the United States and Asia argue for a continued U.S. leadership role in the region.

This project is a RAND Venture. Funding was provided by gifts from RAND supporters and income from operations. The research was conducted by the RAND Center for Asia Pacific Policy within International Programs at the RAND Corporation.