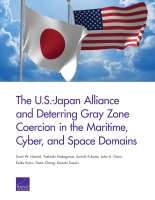 The U.S.-Japan Alliance and Deterring Gray Zone Coercion in the Maritime, Cyber, and Space Domains

The United States and Japan face a dilemma: China is trying to change the status quo in the Indo-Pacific without firing a shot, gradually shifting the strategic playing field through the employment of gray zone coercion, or coercive moves that lie below the threshold that would trigger a military response. China's actions in the maritime, cyber, and (potentially) space domains challenge the status quo in ways that damage the interests of both Japan and the United States and are intended to erode trust in U.S. extended deterrence commitments. The RAND Corporation convened a pair of public conferences where experts from the United States and Japan presented papers focused on the challenges of deterrence by denial and deterrence by punishment in these three domains.

The research described in this report was sponsored by the Government of Japan and conducted in the International Security and Defense Policy Center (ISDP) of the RAND National Security Research Division (NSRD).