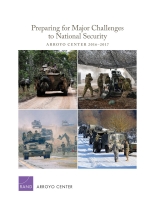 RAND Arroyo Center prepared this report for the U.S. Army to summarize four major threats to national security — those represented by Russia, North Korea, the Middle East, and China. This report assesses the challenges that each threat presents and delineates issues that must be addressed by the Army and by the United States and its international partners. The report also surveys recent analyses conducted by RAND Arroyo Center in four broad categories: the international security environment, fundamental changes in the character of war, attributes the United States needs in its Army, and making the institution of the Army more effective and efficient.

RAND Arroyo Center is the Army's federally funded research and development center (FFRDC) for studies and analysis. Its mission is to help Army leaders make decisions that are informed by objective, high-quality analysis.