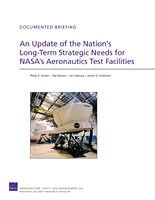 An independent review of the U.S. ability to develop aeronautical vehicles found that the country continues to rely on the capabilities of large government test facilities, including wind tunnels, propulsion test cells, and simulators owned by the National Aeronautics and Space Administration (NASA). These vehicles include civil and military transports, business jets, general aviation, military fighters and bombers, missiles, unmanned vehicles, helicopters, engines, air-breathing hypersonic vehicles, and extraterrestrial planetary air vehicles. Test facility use varies greatly year-to-year despite this continuing long-term need, introducing facility sustainment challenges. Also, despite the strategic importance of new, more advanced facilities, lack of federal investments is forcing the retention of aging and sometimes inferior capabilities. NASA and the nation need to continue developing an aeronautics test technology vision and plan to guide investments, coordination, and sustained support for these vital capabilities. Redundancy within NASA is minimal, but continued dwindling, long-term need for two of the 29 facilities we identified as strategically important in our 2002-2004 study means that these two should be removed from that list. NASA's new Aeronautic Test Program reflects strategic engineering needs and has made progress in bolstering critical support to retain these strategically important capabilities at NASA. National reliance and consolidation with the Department of Defense and U.S. industry facilities to further reduce redundancy remains the next opportunity despite the challenge of reconciling financial and mission differences.