Stop-loss retains soldiers who are scheduled to end their terms of service during a deployment. The Office of the Secretary of Defense identified a set of alternative policies for reducing or eliminating the use of stop-loss in the Army. This briefing documents the results of a study of these proposed alternative policies, focusing on their quantitative effects on deployed-unit fill, personnel stability, and individual deployment tempo. 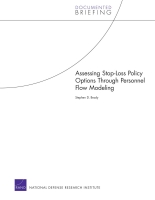 The practice of stop-loss retains soldiers who are scheduled to end their voluntary terms of active service during an impending or ongoing deployment. Because stop-loss keeps soldiers in their units, it generally fills deployment needs in the least amount of time possible and minimizes the budgetary impact of added recruitment, training, and personnel reassignment. However, the benefits of stop-loss come at an undeniable price in the form of direct and indirect costs to the Army and individual soldiers. When the Office of the Secretary of Defense began reexamining the Army's stop-loss policy, it put forth a set of potential alternatives. This briefing documents the detailed manpower flow simulations used to address each of these proposed alternative policies, focusing on their quantitative effects on deployed-unit fill, personnel stability, and individual deployment tempo for the active enlisted force. The analysis compared the options for two military occupational specialties that have very different representations in the force: 11B (infantryman) and 92Y (unit supply specialist). The same tests were also performed on the force as a whole, using a composite, or mix, of specialties. To enrich the discussion of the effects of a new stop-loss policy, the study also considered — in combination with limited changes in accession — brigade combat team cycle lengths and the number of units being rotated into theaters. Early results supported the policy review process, and the decision to suspend stop-loss for the active Army was consistent with the study's findings. The ultimate utility of this research is in describing and documenting these considerations in view of their likely value if and when stop-loss is considered in the future.

Alternatives to Stop-Loss Have Costs That Must Be Traded Off Against the Benefits of Stop-Loss Cessation, but Some Stop-Loss Alternatives Allow Acceptable Fill Performance