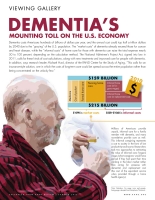 Dementia costs Americans hundreds of billions of dollars per year, and the annual cost could top half a trillion dollars by 2040 due to the "graying" of the U.S. population. The "market costs" of dementia already exceed those for cancer and heart disease, while the "informal costs" of home care for those with dementia can raise the total expense nearly 50 to 100 percent, depending on the calculation method. The National Alzheimer's Project Act, signed into law in 2011, calls for these kinds of cost calculations, along with new treatments and improved care for people with dementia. In addition, says research leader Michael Hurd, director of the RAND Center for the Study of Aging, "This calls for an insurance-style solution, one in which the costs of long-term care could be spread across the entire population rather than being concentrated on the unlucky few."

Millions of Americans provide unpaid, informal care for a family member with dementia, and many nonrelatives provide care as well. This informal caregiving represents a cost to society in the form of lost productivity and income. Researchers took two approaches to estimating the value of informal care: forgone wages (what caregivers would have earned if they had spent their time working in the labor market rather than caring for someone with dementia) and replacement cost (the cost of the equivalent service when provided through a home health agency).

Cases of dementia may more than double by 2040

That’s an increase of about 5 million Americans with dementia