How Have Levels of Intolerance Changed in Western Europe? 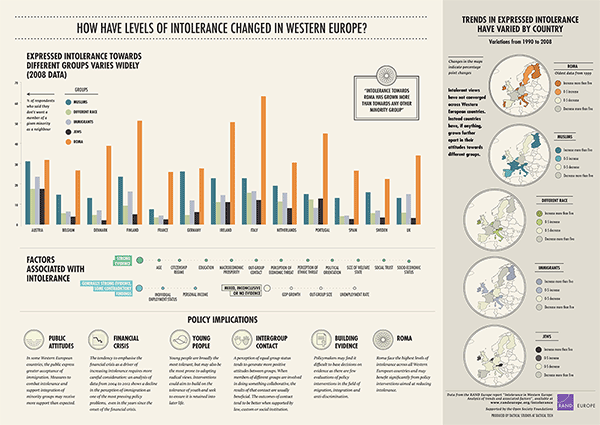 How Have Levels of Intolerance Changed in Western Europe?

Mixed, Inconclusive or No Evidence

In some Western European countries, the public express greater acceptance of immigration. Measures to combat intolerance and support integration of minority groups may receive more support than expected. Variations from 1990 to 2008

The tendency to emphasise the financial crisis as a driver of increasing intolerance requires more careful consideration: an analysis of data from 2004 to 2012 shows a decline in the perception of immigration as one of the most pressing policy problems, even in the years since the onset of the financial crisis.

Young people are broadly the most tolerant, but may also be the most prone to adopting radical views. Interventions could aim to build on the tolerance of youth and seek to ensure it is retained into later life.

A perception of equal group status tends to generate more positive attitudes between groups. When members of different groups are involved in doing something collaborative, the results of that contact are usually beneficial. The outcomes of contact tend to be better when supported by law, custom or social institution.

Policymakers may find it difficult to base decisions on evidence as there are few evaluations of policy interventions in the field of migration, integration and anti-discrimination.

Roma face the highest levels of intolerance across all Western European countries and may benefit significantly from policy interventions aimed at reducing intolerance.

Data from the RAND Europe report "Intolerance in Western Europe: Analysis of trends and associated factors", available at www.randeurope.org/intolerance

Supported by the Open Society Foundations