In 2007, Congress expanded the Work Opportunity Tax Credit program to incentivize employers to hire disabled veterans. In this paper, the author uses nationally representative data from the American Community Survey and a multiple-differences research design to estimate the employment effects of the program. 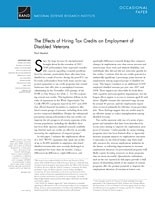 The Effects of Hiring Tax Credits on Employment of Disabled Veterans

In response to growing concerns regarding the employment situation of veterans, between 2007 and 2011 Congress enacted three separate employer tax credits designed to encourage veteran hiring. For these initiatives, as for many other federal programs that aim to improve veterans' employment prospects, there exists little rigorous evidence demonstrating program effectiveness. This paper uses the 2007 expansion of the Work Opportunity Tax Credit program to measure the impact of tax credits on employment of disabled veterans. Using nationally representative data from the American Community Survey and a multiple-differences research design, the paper demonstrates that the new tax credit increased employment among the target group of disabled veterans by 2 percentage points in 2007 and 2008, representing roughly 32,000 jobs each year. Impacts were largest for older veterans, and the tax credits improved employment for those with both cognitive and noncognitive disabilities. The credit also increased income of the targeted group by around 40 percent and primarily generated full-time positions. Rough calculations place the cost of this program per job generated at around $10,000 or less. These results suggest that tax credits can be an effective means of improving employment among disadvantaged veteran populations.

Employer Tax Credits May Be a Useful Policy Tool