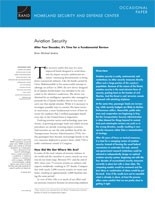 After Four Decades, It's Time for a Fundamental Review

Aviation security is costly, controversial, and contentious; no other security measures directly affect such a large portion of the country's population. Because of the nature of the threat, aviation security is the most intrusive form of security, pushing hard on the frontier of civil liberties. And the threat is real: Terrorists remain obsessed with attacking airplanes.

At the same time, passenger loads are increasing, while security budgets are likely to decline. Performance suffers. Meanwhile, public tolerance and cooperation are beginning to fray. But the Transportation Security Administration is often blamed for things beyond its control. And post-catastrophe reviews can push us in the wrong direction, usually resulting in new security measures rather than a reexamination of strategy.

After 40 years of focus on tactical measures, it is time for a sweeping review of aviation security. Instead of forming the usual federal commission to undertake this task, several non-government research institutions could be selected to independently design an optimal aviation security system, beginning not with the four decades of accumulated security measures currently in place but with a clean slate. The competing models would be reviewed and the best ideas or combination of ideas would be put forward. Even if the results turn out to resemble what is already in place, at least the process offers some comfort that we are pretty close to getting it right.

This paper results from the RAND Corporation's Investment in People and Ideas program. Support for this program is provided, in part, by the generosity of RAND's donors and by the fees earned on clientfunded research. This research was conducted in the RAND Homeland Security and Defense Center, which conducts analysis to prepare and protect communities and critical infrastructure from natural disasters and terrorism.