The fraction of American youth meeting U.S. Army enlistment standards for weight and body fat has decreased markedly over the past three decades. In response to this adverse trend, in 2005, the Army allowed six Military Entrance Processing Stations (MEPS) to grant an enlistment waiver to applicants who exceeded weight and body fat standards as long as they passed a physical endurance, motivation, and strength test known as the Assessment of Recruit Motivation and Strength (ARMS) test. The test was developed by Army medical scientists who believed that it complements existing physical tests used to identify potential enlistees who would and would not fare well in the military. The Army implemented ARMS at eight additional MEPS in February 2006 and then at the remaining 51 MEPS in April 2006.

In February 2005, the U.S. Army allowed six Military Entrance Processing Station (MEPS) locations—Atlanta, Buffalo, Chicago, Sacramento, San Antonio, and San Diego—to enlist Army applicants who did not meet applicable weight-for-height and body fat percentage standards but who passed a test known as the Assessment of Recruit Motivation and Strength (ARMS) test.* ARMS has two components: a step test and a pushup test (initially, it also had a lift component). Successfully completing these tests is meant to indicate that a recruit has the physical and motivational endurance needed to serve in the Army. The Army expanded the use of the ARMS test to eight additional MEPS in February 2006 and to the remaining 51 MEPS in April 2006.

The decision to allow ARMS waivers nationwide was made in a difficult recruiting environment and at a time when the Army was seeking to grow active-duty end strength. The decision was also made with the knowledge that America's obesity epidemic was adversely affecting the supply of eligible recruits and with the belief that ARMS complements existing physical fitness tests used to identify individuals who will and will not fare well in the military. According to data available from the Military Entrance Processing Command, between 1988 and 2007, the mean body mass index (BMI) of Army male applicants increased from 23.8 to 24.9, and the mean BMI of female applicants increased from 22.3 to 23.9 (Figures 1 and 2). Even-larger increases in BMI are apparent among the heaviest applicants. For example, BMI at the 75th percentile of the applicant BMI distribution increased from 26.1 to 27.7 for males and from 23.8 to 25.9 for females. BMI in the overall U.S. youth population increased by even more during this period (Asch et al., 2009). 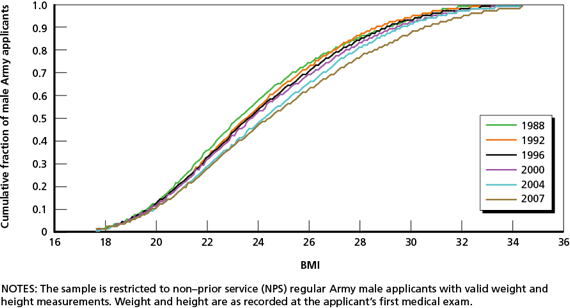 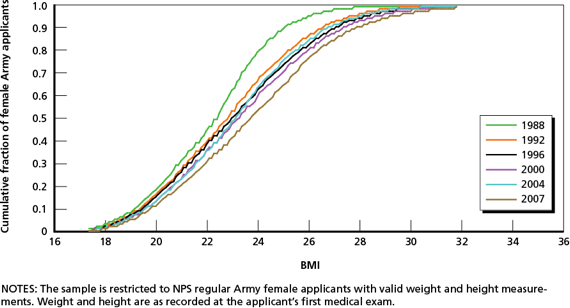 The Army granted waivers to overweight and over–body fat applicants who passed the ARMS test, hoping that this would increase enlistments without adversely affecting attrition and other measures of recruit readiness. The research reported in this document investigates whether implementation of ARMS succeeded in meeting this goal by examining military personnel data obtained from the Military Entrance Processing Command and the United States Army Accessions Command on nearly 260,000 individuals who applied to the Army between 2004 and 2007.

The Effect of ARMS on Army Accessions

Change in Application and Accession Outcomes Between 2004 and 2005 Across Nonstudy and Study Sites, by Gender

We examined the robustness of the findings reported in Table 1 by controlling for differences in local economic conditions and recruiting resources and for the possibility that some of the relative growth in applications and accessions at ARMS study sites was attributable to the fact that these sites drew applicants and accessions away from nearby MEPS. The basic pattern of results, however, is unaffected by these considerations: The number of overweight applications and accessions, but not the accession rate, grew strongly at ARMS study sites relative to nonstudy sites between 2004 and 2005. Taking these factors into account, our estimate is that ARMS increased overweight but within–body fat male (female) accessions by 13 (26) percent and overweight and over–body fat male (female) accessions by 350 (192) percent. Overall, our estimates imply that ARMS increased overweight male (female) accessions by 35 (62) percent. These estimates also imply that ARMS had no statistically significant effect on the number of within-weight Army applicants or accessions.

The Effect of ARMS on Army Attrition

Although we find that ARMS had no effect on attrition rates, it is nonetheless possible that those who accessed through an ARMS waiver separated for different reasons than those who did not. In particular, it might be the case that ARMS accessions were more susceptible to injury than their non-ARMS counterparts and were therefore more likely to separate for medical reasons. However, an analysis of separation codes available in our administrative data suggest that male accessions who passed the ARMS test and separated within 18 months of accession were somewhat less likely than within-weight accessions to separate for medical reasons but somewhat more likely to separate because they did not meet physical (e.g., weight and body fat) standards (see Table 3). Curiously, the same was true of male accessions who failed the ARMS test and so presumably met weight standards prior to accession. Female accessions who took the ARMS test prior to accession were also less likely than within-weight accessions to separate for medical reasons. This evidence, then, suggests that, if anything, ARMS accessions were less susceptible than non-ARMS accessions to injury that resulted in separation. However, it might still be the case that ARMS accessions were more likely than non-ARMS accessions to suffer other types of injuries, including those that impede performance but do not result in separation. We did not have access to data that would allow us to investigate this issue.

Reason for Separation, by Gender and Weight and Body Fat Percentage Relative to Army Standards: FY 2007

When the Army implemented ARMS at the six study sites in 2005 and then at the remaining MEPS in 2006, the hope was that the test would increase accessions among overweight and over–body fat applicants without adversely affecting attrition. The evidence reported here suggests that implementation of ARMS at the six study sites succeeded in doing just that. Our difference-in-differences estimates imply that the implementation of ARMS increased male accessions by 13 percent and female accessions by 20 percent in 2005 and that virtually all of that percentage increase came from overweight and over–body fat accessions. Despite the fact that ARMS resulted in a large increase in the proportion of applicants who were overweight and over–body fat, our estimates imply that ARMS had no effect on attrition rates. This suggests that the ARMS test is effective in identifying overweight and over–body fat recruits who are as likely as within-standards recruits to complete initial training. Moreover, ARMS has been quite inexpensive to implement. Our estimates imply that the cost of ARMS per additional accession was $163 in fiscal year 2007, which compares very favorably with the estimated per-accession cost of other Army recruiting initiatives.

We temper this overall conclusion with several caveats. First, we cannot say for certain whether the broader implementation of ARMS since 2005 has been as successful as it was at the six study sites. However, at a minimum, the available evidence indicates that overweight and over–body fat applicants who pass ARMS are no more likely to separate than are applicants who meet weight and body fat standards. Second, it remains to be seen whether ARMS accessions in the longer run will turn out to be as productive on average as within-standards accessions. Although our tabulations suggest that ARMS accessions are, if anything, somewhat less likely than non-ARMS accessions to separate for medical reasons, it may be that they are more prone to injuries (e.g., heat illness, musculoskeletal injury) that do not result in separation but that make these accessions less productive. Moreover, it is important to acknowledge that ARMS appears to increase the number of overweight but within–body fat accessions. These individuals would not be subject to the ARMS test, and our evidence suggests that they are somewhat less likely than within-weight recruits to complete initial training.

The decision to implement ARMS was made in a weak recruiting environment. Today, the recruiting environment is much stronger (largely because of the weak civilian labor market), and, as a result, the Army decided to suspend ARMS as of October 2009. However, even in a very strong recruiting environment like the current one, ARMS can serve a highly useful role by identifying enlistees who, despite weight problems, can be productive members of the Army enlisted force. The success of the ARMS test suggests what might appear obvious in hindsight: The population of overweight and over–body fat individuals is quite heterogeneous. Some of these individuals are truly unfit for service, but many others possess the desire and ability to serve their country in the armed forces and, given the chance, will succeed in that capacity. In both weak and strong recruiting environments, then, the ARMS test offers a simple, cost-effective way to separate the fit from the unfit.

** All counts are expressed in natural logs. The difference in these log counts approximate percentage changes. Here, the difference rounds to 18.3 percent.

RAND Health Quarterly is an online-only journal dedicated to showcasing the breadth of health research and policy analysis conducted RAND-wide.