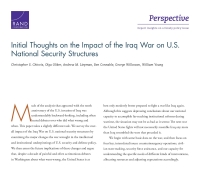 Initial Thoughts on the Impact of the Iraq War on U.S. National Security Structures

Much of the analysis that appeared with the tenth anniversary of the U.S. invasion of Iraq was understandably backward-looking, including often heated debates over who did what wrong and when. This paper takes a slightly different tack, surveying the overall impact of the Iraq War on U.S. national security structures by examining the major changes the war wrought in the intellectual and institutional underpinnings of U.S. security and defense policy. The authors assess the future implications of these changes and argue that, despite a decade of painful and often acrimonious debates in Washington about what went wrong, the United States is at best only modestly better prepared to fight a war like Iraq again. They begin with some basic data on the war and then focus on four key, interrelated issues: counterinsurgency operations, civilian state-making, security force assistance, and our capacity for understanding the specific needs of different kinds of interventions, allocating resources and adjusting expectations accordingly.

This paper was produced within the International Security and Defense Policy Center of the RAND National Defense Research Institute, a federally funded research and development center sponsored by the Office of the Secretary of Defense, the Joint Staff, the Unified Combatant Commands, the Navy, the Marine Corps, the defense agencies, and the defense Intelligence Community.