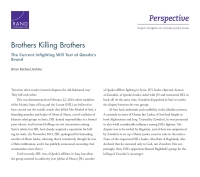 Terrorists often resolve internal disputes the old-fashioned way: They kill each other. Battles between rival rebel groups and within terrorist organizations are not uncommon. Internal feuds have characterized terrorist movements throughout modern history, from the Russian Revolution to the Palestinian civil war.

In February 2014, members of the Islamic State of Iraq and the Levant (ISIL) are believed to have carried out the suicide attack that killed Abu Khaled al-Suri, the leader of a rival coalition of Islamist rebel groups in Syria. In response, Ayman al-Zawahiri took the unprecedented step of publicly expelling ISIL from al Qaeda. An open break like this creates real risks for both ISIL's and al Qaeda's leadership, setting up a showdown that could turn an internal dispute into a schism that cleaves across the jihadist universe.

In addition, it could create new intelligence and propaganda opportunities for the United States. If ISIL turns out to be the stronger movement, al Qaeda's command over the global movement would be seriously weakened. The biggest opportunities for exploiting al Qaeda's internal disputes may lie in countering al Qaeda's future recruitment. The prospect of killing or being killed by fellow jihadists ought to be a less-attractive proposition than defending Islam against perceived infidel aggression. However, exploiting the favorable circumstances created by the current divisions requires detailed local knowledge and political-warfare know-how. Pursuing this unprecedented opportunity will require the creation of a dedicated task force to act as a focal point for analysis and action.