More than a decade's worth of experience in Afghanistan and Iraq has honed the Army's ability to fight irregular adversaries, but these may not be the adversaries of the future. The author reviews the military adversaries and challenges that this nation and others currently face and draws lessons for the battles the United States has not yet fought but likely will in the future. 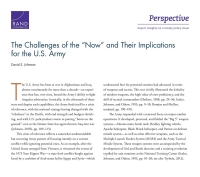 The Challenges of the "Now" and Their Implications for the U.S. Army

The U.S. Army has been at war in Afghanistan and Iraq almost continuously for more than a decade. While this experience has honed the Army's ability to fight irregular adversaries, these may not be the adversaries the Army will need to fight in the future. This perspective reviews the spectrum of military adversaries and operations the nation currently faces, how it has adapted to irregular challenges and the consequences of that adaptation, and the lessons of other recent conflicts. The aim here is not so much to learn about the current conflicts but to help understand battles the United States has not yet fought but likely will in the future — to learn how to address the recurring Army pattern of ignoring potential conflicts while focusing intently on a current one. To counterbalance this focus, the author has synthesized prior RAND research and drawn on personal experience and discussions with current Army personnel. He notes that our country's potential adversaries know U.S. military capabilities and vulnerabilities and are adapting. The Army needs to prepare for the full range of adversaries it is likely to confront, some of whom will be armed with weapons that are now superior to some of its own.

The research reviewed in this perspective was conducted within the RAND Arroyo Center.