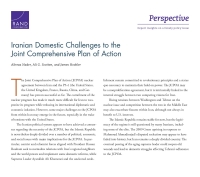 Iranian Domestic Challenges to the Joint Comprehensive Plan of Action

The Joint Comprehensive Plan of Action (JCPOA) nuclear agreement between Iran and the P5+1 (the United States, the United Kingdom, France, Russia, China, and Germany) has proven successful so far. However, some major challenges to the JCPOA from within Iran may emerge in the future. This Perspective examines the nature of the factional divisions that exist in Iran; how this factionalism may impact the nuclear agreement; and the viability of the JCPOA if major events were to occur, such as the death of the supreme leader or heightened U.S.-Iran tensions.

A lack of substantial economic benefits from the nuclear agreement and a marked increase in U.S.-Iranian tensions could shatter regime unity regarding the JCPOA's utility. In the short term, a failure by Rouhani to win reelection in 2017 could shift the balance of power back into the hands of traditional conservatives and principlists who oppose Iran's reintegration into the global economy and, therefore, are less averse to provoking the international community than are the centrists and reformists.

Washington must do more to ensure that the average Iranian sees the economic benefits of the deal. In addition, to help ensure that centrists continue to play a decisive role until the inevitable succession crisis, Washington must take efforts to lessen Tehran's perception that the United States poses an existential threat. If ensuring the longevity of the nuclear deal truly is a U.S. strategic priority, the President may have to take steps that are not politically advantageous in the short term. But weighed against the alternative, that risk is advisable.

This project is a RAND Venture. Funding was provided by gifts from RAND supporters and income from operations. The research was conducted within the Center for Middle East Public Policy (CMEPP), part of International Programs at the RAND Corporation.