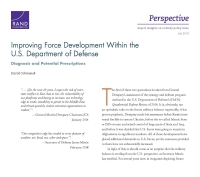 Improving Force Development Within the U.S. Department of Defense

For several years now, in wargames depicting future hypothetical conflicts against the nation's most capable adversaries, programmed U.S. forces repeatedly have failed to achieve their primary operational objectives and suffer heavy losses in doing so. The U.S. armed forces today are, at once, larger than needed to fight a single major war, failing to keep pace with the modernizing capabilities of great power adversaries, poorly postured to meet key challenges in Europe and East Asia, and insufficiently ready and trained to get the most operational utility from many of their active-component units. This did not happen overnight. The U.S. Department of Defense's (DoD's) failure to adapt to a deteriorating security environment goes back more than a decade. Multiple reasons can be cited for this failure, including a sense of complacency resulting from the success that U.S. forces experienced in Operations Desert Storm (Iraq) and Allied Force (former Yugoslavia); the resources and attention that have been devoted to counterinsurgency and stability operations in Afghanistan and Iraq; and the priority given to counterterrorism campaigns against Islamic State, Al Qaeda, and other Salafist-jihadi groups in the Middle East and globally. Whatever the causes, there is an urgency to the need to modernize U.S. military capabilities and operational concepts, lest we and our allies lose further ground to China and Russia. This Perspective examines how things got to this point and what DoD's leaders should do to ensure that the needs of future warfighters are better represented in the Department's decisionmaking processes.

This Perspective was funded through a generous grant from the Ford Foundation and developed within the International Security and Defense Policy Center of the RAND National Security Research Division.