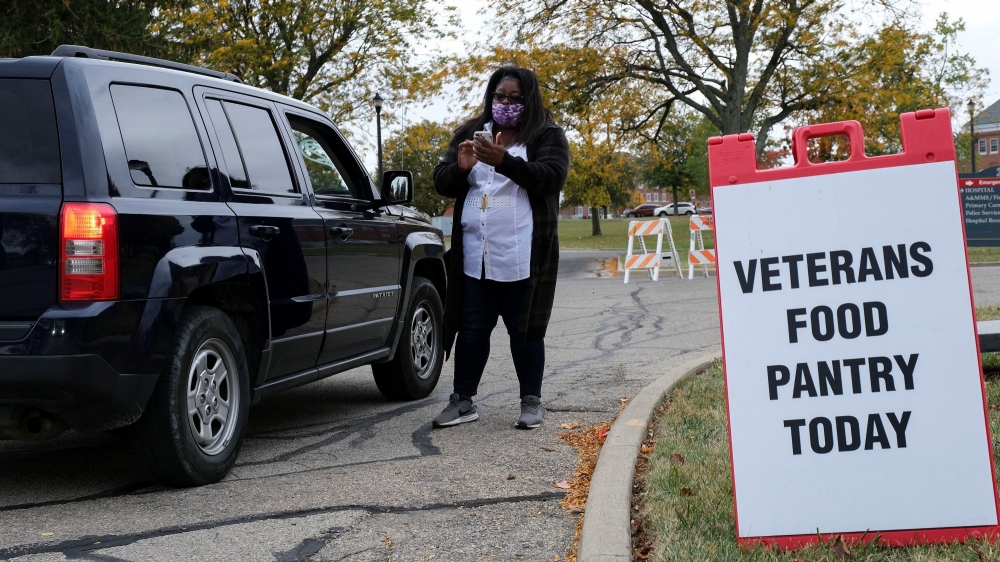 A worker checks the identification of a veteran receiving aid at a food bank in Dayton, Ohio, October 15, 2020

U.S. veterans are less likely to live in poverty than their nonveteran counterparts, but approximately 1.5 million live below the federal poverty level (FPL). An additional 2.4 million veterans are thought to live paycheck to paycheck at approximately twice the FPL (Bennett, 2019; National Center for Veterans Analysis and Statistics, 2015; Robbins and Ravi, 2017). Although we know that food insecurity—limited or uncertain access to adequate food—is a critical social, economic, and health challenge, its prevalence among veterans has been difficult to ascertain.

Some veteran subgroups experience higher rates of food insecurity than U.S. veterans overall (e.g., Afghanistan and Iraq war veterans, women veterans, veterans who are experiencing or have experienced homelessness, veterans with serious mental illness). Being food insecure is an independent risk factor for numerous poor health outcomes. It is also associated with worse control of medical conditions and higher health care costs and use of acute care services (Narain et al., 2018; O'Toole, Roberts, and Johnson, 2017; Widome et al., 2015). However, the data on food security and veterans are extremely limited. Prior to the COVID-19 pandemic, estimates of food insecurity among veterans varied between 6 percent and 24 percent, with the higher bound being more than twice that of the general U.S. population (Brostow, Gunzburger, and Thomas, 2017; Miller et al., 2016; Schure et al., 2016; Wang et al., 2015).

Some veteran subgroups are particularly vulnerable to food insecurity.

Food security is one component of social, economic, and health outcomes and overall well-being. Many factors that contribute to a higher risk of food insecurity among the general population are more prevalent among veterans, such as certain mental health conditions. Veterans experiencing homelessness or suffering from posttraumatic stress disorder or substance use disorder, for example, face an increased risk of functional disabilities and reduced workforce participation, which can ultimately contribute to food insecurity (O'Toole, Roberts, and Johnson, 2017).

Among all veterans, those who are younger, recently left active-duty military service, and had a lower final military paygrade are at a higher risk of food insecurity (Brostow, Gunzburger, and Thomas, 2017; London and Heflin, 2015; Miller et al., 2016; Widome et al., 2015). It has also been found that Iraq and Afghanistan war veterans (Widome et al., 2015) and veteran women have a higher risk of food insecurity, with a 2018 study finding that 27.6 percent of veteran women are "food insufficient" (Narain et al., 2018).

Veterans who live in rural or low-income areas with poor access to nutritious food might also have a higher risk of food insecurity; barriers related to transportation can make it difficult to travel to locations where there is more food variety (Dutko, Ver Ploeg, and Farrigan, 2012).

Given the impact on employment and financial stability among many marginalized populations in the United States, it is likely that the COVID-19 pandemic exacerbated the prevalence of food insecurity for the most vulnerable subgroups of veterans.

Emerging evidence has shown that being food insecure is associated with poorer mental health and increased suicide risk (Kamdar et al., 2021). Although studies of the relationship between food insecurity and suicide risk factors are sparse, this is an important area for increased attention, especially among veterans.

Significant research has also shown a correlation between lacking regular access to food and poorly controlled hypertension, diabetes, HIV disease, and asthma, as well as a reduced ability to perform activities of daily living. Figure 1 shows associations between food insecurity and mental illness and poor self-ratings of physical health among veterans.

Those who experience food insecurity are often financially insecure and need to make trade-offs between buying adequate food or paying rent and utilities. There have been other reports of underuse of medication or delaying medical care among those who are food insecure. In addition, 50 percent of veterans who are experiencing homelessness or are at risk of homelessness have experienced food insecurity (O'Toole, Roberts, and Johnson, 2017).

The Supplemental Nutrition Assistance Program (SNAP) is designed to address food insecurity by providing cash benefits to purchase food. Yet, participation among veterans is low relative to estimates of food insecurity in this population. Even among veterans who are enrolled in food assistance, many still struggle to afford nutritionally adequate food.

Around 1.3 million veterans use SNAP benefits to supplement their food budget and increase their access to healthy food (Keith-Jennings and Cai, 2020). Florida has the largest number of veterans participating in SNAP (116,000), followed by Texas (97,000) and California (94,000). In Oregon, Rhode Island, West Virginia, and Washington, D.C., at least 10 percent of veterans lived in households that received SNAP between 2016 and 2018. Even so, approximately 59 percent of eligible veterans were not enrolled in SNAP (Keith-Jennings and Cai, 2020; Pooler et al., 2018).

To be eligible for SNAP, most households must have incomes below 135 percent of the FPL, unless state policy differs. For example, in states with categorical eligibility, receipt of cash assistance or other means-tested programs automatically qualifies people for SNAP. In this case, gross income cannot exceed 185 percent of the FPL.

Barriers to participation might include a lack of knowledge about SNAP and stigma around program participation, something that might be more prevalent among veterans because of beliefs about self-reliance that they may have developed during military service (Weiss and Coll, 2011; U.S. Government Accountability Office, 2016). Figure 2 shows the rate at which food-insecure and income-eligible veterans are underenrolled in SNAP.

Following briefings on veteran food insecurity to the U.S. House and Senate in 2015, the Veterans Health Administration (VHA) formed the national Ensuring Veteran Food Security Workgroup, which partnered with government and nonprofit agencies to examine food insecurity among veterans, identify those at risk, provide training recommendations for VHA staff, and promote greater coordination of resources and initiatives to support veterans.

Starting in October 2017, the U.S. Department of Veterans Affairs (VA) integrated a single-item food insecurity screening tool into its electronic health record clinical reminder system. If a veteran appears at risk for food insecurity, there is a prompt for providers to offer the veteran a referral to a social worker or dietician; these veterans are screened every three months thereafter. Positive screening results are also communicated to the veteran's primary care provider.

The Ensuring Veteran Food Security Workgroup has also been supporting the expansion of facilities involved with the VA/Feeding America program, which organizes on-site or mobile food pantries at VA facilities. As of 2020, there were 17 VA-affiliated pantries serving more than 40,000 veterans and their families (O'Toole, 2020).

Such targeted assessment of food insecurity may also be assisting with outreach to specific veteran subpopulations. One study that reviewed food insecurity screenings administered at six VA primary care clinics for the homeless found that 47.3% of the 270 patients screened received SNAP benefits, and 22 percent relied on emergency food resources (O'Toole, Roberts, and Johnson, 2017). While integrating screening for food insecurity into clinic settings is an important way to reach potentially vulnerable veterans, not all at-risk veterans use the VA system.

Sources of Data on Food Insecurity Among Veterans

Although food insecurity has been studied extensively in the general U.S. population, there is surprisingly limited data on veteran food insecurity (Cypel et al., 2020). Current national data on food insecurity have been collected through large surveys, such as the Census Bureau's Current Population Survey of U.S. households and the University of Michigan Health and Retirement Study, sponsored by the National Institute on Aging. These are essentially the only national-level sources of data on veteran food insecurity. Because these data sets are structured to sample nationally representative civilian populations, it is unclear to what extent the veteran samples are representative of the U.S. veteran population.

Another important data source for food insecurity is VHA. Although VHA has been collecting screening data on all patients since 2017, information about food insecurity status is drawn from just one question. In addition, veterans who receive care through VHA might not be representative of U.S. veterans in general.

Food security is critical to the well-being of the nation's veterans. Although VA screens for food insecurity, among other measures of well-being, not all veterans are eligible or opt to receive care through VA.

Resources for older adults and those with limited mobility

Resources for children and families

Tamara Dubowitz is a senior policy researcher. She has a Sc.D. in public health nutrition/social epidemiology and conducts research on how government policies and neighborhood environments affect health, nutrition, and risk of developing diet-related disease.