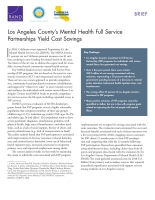 In 2004, California voters approved Proposition 63, the Mental Health Services Act (MHSA). The MHSA levied a 1 percent tax on California personal incomes over $1 million, resulting in new funding for mental health in the state. The intent of the act was to address the urgent need for accessible, recovery-based, community mental health services.

Key MHSA-funded services include Full Service Partnership (FSP) programs that are based on the assertive community treatment (ACT) and wraparound services models. These services use a team approach to provide comprehensive, community-based psychiatric treatment, rehabilitation, and support for "whatever it takes" to move toward recovery and resilience for individuals with serious mental illness. Los Angeles County used MHSA funds to provide comprehensive services across the life span, including expanded access to FSP services.

The current analysis builds on that work by examining the extent to which the costs associated with FSP program implementation are recouped via savings associated with the same outcomes. The evaluation team estimated the costs and financial benefits associated with each of these outcomes over a five-year period (2012–2016), mapping costs to outcomes for FSP clients 12 months prior to their FSP participation and comparing that with the 12 months following FSP participation. Researchers quantified these outcomes using administrative data, including claims data from all payers and program data shared with the evaluators by the Los Angeles County Department of Mental Health (LAC DMH). The team gathered associated costs (in 2018 U.S. dollars) from primary and secondary sources that reported annualized expenditures associated with support services among residents in Los Angeles County.

Over a five-year period, FSP outcomes were associated with $82.9 million of cost savings, representing a 24 percent reduction in government spending. More specifically, for the five outcomes studied (homelessness, criminal justice detention, behavioral health inpatient stays, connection to outpatient primary care, and employment), the team estimated a reduction from $345 million to $262 million in service-related expenditures borne by Los Angeles County, the state of California, and the federal government among 24,282 FSP beneficiaries.

The largest savings ($63.1 million) came from reductions in criminal justice detention — both in the percentage of individuals detained and the average duration in detention (see Figures 1 and 2). In this domain, there was a 68.4 percent reduction in costs. This was followed by savings in spending on behavioral health inpatient stays ($14.2 million, or 18 percent) and homelessness ($2.6 million, or 4 percent). When comparing cost savings by group (children, TAY, and adults), the largest cost savings in relative terms came from TAY (30 percent) and in absolute terms from adults ($51.6 million). Cost savings were observed across four of the five outcomes examined. The exception was connection to outpatient primary care, where there was a 16 percent increase in costs; however, additional expenditures in primary care likely served to mitigate the risk — and associated costs — of inpatient care for physical health conditions, which were not measured, over the same period.

The average annual FSP program expenditures per client from 2012 to 2016 were $13,807, for a total of $335.3 million in the first year of FSP enrollment for all clients. The analysis was limited to a discrete set of outcomes, and our estimates were intentionally conservative, but at minimum they indicate that this $335.3 million investment was offset by savings of $82.9 million, 25 percent of the investment. This figure does not account for indirect, or "downstream," financial benefits — such as future medical cost savings associated with preventive primary care, reduced policing, social services, and sanitation costs associated with reduced homelessness over the long run — or higher tax revenue associated with increased employment. It also does not account for nonfinancial benefits, such as improvements in quality of life, stability, and interpersonal relationships. Many of the benefits of FSP programs cannot readily be quantified.

Because these estimates of cost savings are tied to the available data, better data would allow a more accurate and complete assessment of cost savings. The research team recommends that LAC DMH strengthen its data collection efforts by collecting data on a wider range of outcomes of interest, using multiple-item scales instead of single-item measures, and ensuring that data are collected at regular intervals. Linking additional medical care records, such as Medicaid encounters or commercial claims that might not occur at county facilities, would improve the ability to measure health outcomes. These efforts would improve the value of the data for tracking changes in outcomes over time. Because many data collection procedures are state-mandated, advocacy may be needed at the state level to adjust data collection requirements.

The current analysis found evidence that the investment LAC DMH has made in FSP programs has yielded positive outcomes and a decrease in spending on behavioral health inpatient stays and criminal justice detention, as well as an overall decrease in spending on clients who are homeless. The net savings from these changes offset 25 percent of the amount spent by LAC DMH on FSP programs for the first year of clients' enrollment. There are nonfinancial benefits of the changes that complement the measured financial benefits. Both must be considered to fully describe the benefits of these programs.

The current analysis found evidence that the investment LAC DMH has made in FSP programs has yielded positive outcomes and a decrease in spending on behavioral health inpatient stays and criminal justice detention, as well as an overall decrease in spending on clients who are homeless. The net savings from these changes offset 25 percent of the amount spent by LAC DMH on FSP programs for the first year of clients' enrollment. There are nonfinancial benefits of the changes that complement the measured financial benefits. Both must be considered to fully describe the benefits of these programs.