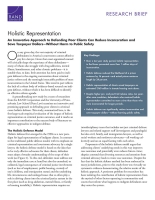 On any given day, the vast majority of criminal defendants in America's courtrooms cannot afford to pay for a lawyer. Given that court-appointed counsel will critically shape the experience of these defendants — many of whom also struggle with drug addiction, mental illness, homelessness, and other chronic problems — it is notable that, to date, little attention has been paid to indigent defense in the ongoing conversation about criminal justice reform and the seemingly intractable problem of mass incarceration in the United States. This trend in part reflects the lack of a robust body of evidence-based research on indigent defense, without which it has been difficult to identify an effective reform agenda.

A groundbreaking new study by a team of researchers from the RAND Corporation and the University of Pennsylvania Law School (Penn Law) examines an innovative and promising approach to defending poor clients in criminal cases: holistic defense. This study, summarized here, is the first large-scale empirical evaluation of the impact of holistic representation on criminal justice outcomes, and it marks an important contribution to the nascent body of literature on effective approaches in indigent defense.

Holistic defense first emerged in the 1990s as a new paradigm for legal representation of indigent clients. In contrast to the traditional public defense model, with its emphasis on criminal representation and courtroom advocacy by a single lawyer, the holistic defense model is based on the idea that to be truly effective advocates for their clients, defenders must adopt a broader understanding of the scope of their work (see Figure 1). To this end, defenders must address not only the immediate case at hand but also the enmeshed, or collateral, legal consequences of criminal justice involvement (such as loss of employment, public housing, custody of one's children, and immigration status) and the underlying life circumstances and nonlegal issues that so often play a role in driving clients into the criminal justice system in the first place (such as drug addiction, mental illness, or family or housing instability). Holistic representation requires an interdisciplinary team that includes not just criminal defense lawyers and related support staff (investigators and paralegals) but also civil, family, and immigration lawyers, as well as social workers and nonlawyer advocates — all working collectively and on an equal footing with each other.

Proponents of the holistic defense model argue that addressing clients' underlying needs in this way improves case outcomes and potentially even reduces future crime; skeptics contend that diverting resources and attention from criminal advocacy leads to worse case outcomes. Despite the fact that the holistic defense method has been embraced in many jurisdictions, prior to this study there was virtually no systematic evidence demonstrating the relative merits of the holistic approach. A persistent problem for researchers has been isolating the contribution of holistic representation from the myriad of other factors operating in communities and courts that inform what happens to indigent defendants once they enter the system.

The Bronx Defenders and the Legal Aid Society of New York

The RAND and Penn Law research team studied two institutional providers of indigent defense in the Bronx, a New York City borough with an estimated 1.4 million residents as of 2017 (see Figure 2). The two legal aid organizations, the Bronx Defenders and the Legal Aid Society of New York, exist side by side within the same court system. The Bronx Defenders has been operating under a holistic defense model since the office's inception in 1997. Although the Legal Aid Society, one of the nation's oldest and largest providers of indigent legal services, also recognizes the importance of addressing collateral issues and clients' nonlegal needs, it has historically followed a more traditional model. Clients are allocated to the two defender associations semirandomly through a rotating shift assignment system that created a natural experiment for the researchers, enabling them to rigorously capture the effects of the holistic defense approach. Using administrative data covering more than half a million cases and a quasi-experimental research design, the authors estimated the causal effect of holistic representation on case outcomes and future offending.

The authors found that, although holistic representation in the Bronx did not affect conviction rates, it did reduce the likelihood of a custodial sentence by 16 percent — and it reduced the expected sentence length by 24 percent. Over the ten-year study period, holistic representation in the Bronx resulted in nearly 1.1 million fewer days of incarceration, saving New York taxpayers an estimated $160 million on inmate housing costs alone (see Figure 3). The authors also noted that holistic defense appreciably increased the use of nonincarceration sentencing alternatives. This was particularly evident in drug and larceny cases, where holistic representation reduced custodial sentences by 63 percent and 72 percent, respectively.

The research team found that, as of one year post-arraignment and beyond, holistic representation had neither a positive nor an adverse effect on future criminal justice contacts. Despite an appreciably higher pre-trial release rate for clients who received holistic defense services, in a follow-up spanning up to ten years after case resolution, defendants who received holistic representation were arrested no more frequently than defendants who were incarcerated for longer periods. These results suggest that, although holistic representation does not dramatically reduce recidivism (as some proponents have claimed), strengthening indigent defense appears to offer considerable potential to reduce incarceration without compromising public safety.

To better understand how the holistic defense model works in practice, the authors also conducted a series of semistructured interviews with criminal justice stakeholders in the Bronx, including Bronx Defenders, attorneys and social workers from Legal Aid, appointed private counsel, judges, and external service providers. Both the Bronx Defenders and the Legal Aid Society described their defense representation as "holistic," but the interviews revealed important differences in their respective approaches: Although both organizations make referrals to other advocates for help with noncriminal issues — for example, risk of deportation or potential loss of public housing — the Bronx Defenders organizes its offices into interdisciplinary teams, in effect institutionalizing practices that are most likely to facilitate the flow of information across different members of the defense team. The authors observed that this structural approach allows the Bronx Defenders to monitor not only whether team members are communicating effectively but also whether they are identifying client needs that fall outside their independent practice areas.

Although the authors were unable to precisely explain the outcome differences across the two defender organizations, taken together, their quantitative and qualitative findings did point to one possible explanation: The holistic approach may provide criminal justice decisionmakers with better individualized information about defendants. Incarceration of some defendants may be necessary to protect public safety, but for others it serves no corrective purpose and merely represents wasted resources. Large caseloads and assembly-line processing of criminal defendants make it difficult for prosecutors and judges to understand which defendants could be treated leniently without creating future risk. The holistic defense model, the RAND and Penn Law authors posit, may function as a superior information-gathering mechanism, helping defense attorneys identify mitigating features of their cases and then effectively convey these to prosecutors, judges, and juries.

Numerous other communities have adopted a holistic defense model, some with help from the Bronx Defenders' Center for Holistic Defense. But how best to replicate the model to generate comparable impacts in other communities, with their own peculiar characteristics, remains a key, unresolved question. The findings from RAND and Penn Law's evaluation of the Bronx Defenders are an important addition to the evidence base on how the holistic defense model performs in real-world practice.

Evaluations such as this allow public defenders to monitor and improve their performance, identify features of the program that are associated with better client outcomes, ensure that resources are properly allocated, and advocate for funding in an era when legislatures increasingly prefer that empirical data accompany funding requests. Future research should examine the effect of holistic defense on outcomes beyond the criminal justice sphere. For instance, how might holistic representation help address clients' housing or health needs?