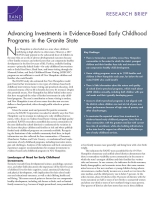 New Hampshire is often hailed as a state where children's well-being is high relative to other states. However, a 2017 RAND study pointed to the substantial share of children in the state who are at risk of adverse developmental outcomes because of low family resources and other factors that can compromise healthy development in the first few years of life. Further, available funding streams — primarily federal funds — for early childhood interventions such as Early Head Start, Head Start, and home visiting through the Maternal, Infant, and Early Childhood Home Visiting (MIECHV) program are not sufficient to reach all New Hampshire children and families who could benefit.

The RAND study also estimated that New Hampshire would gain from further investments in two types of evidence-based early childhood interventions: home visiting and preschool education, with estimated returns of $2 to $6 in benefits for every $1 invested. Despite this potential return, New Hampshire has fallen behind other states that have recognized the value of further investments in early childhood programs. The state's contribution to home visiting is modest, and New Hampshire is one of seven states that does not use state dollars to fund preschool, either through public schools or private programs.

Given the unmet need and potential for positive economic returns, the RAND Corporation was asked to identify ways that New Hampshire can be strategic in making new early childhood investments, with a focus on evidence-based home visiting and high-quality preschool. RAND researchers assembled data across communities in the state (defined by school districts) to understand the variation in the factors that place children and families at risk and where publicly funded early childhood programs are currently available. Recognizing the limitations of the available community-level data, in-depth information was also collected for four communities — Claremont, Manchester, Nashua, and Coös County — to understand local implementation of early childhood programs, including innovative strategies and challenges. Analyses of the indicators and focal community experiences support recommendations for strategic investments in evidence-based early childhood programs in New Hampshire.

Extensive research from developmental science, psychology, neuroscience, and other fields documents the importance of the first five years of children's lives for their cognitive, social, emotional, behavioral, and physical development, with implications for their school readiness and educational outcomes, as well as their lifelong health and well-being. This same research points to factors that can compromise healthy development, including risk factors at birth, such as limited family resources (e.g., because of single parenthood, teen parenthood, or low family income more generally) and being born with a low birth weight.

The indicators the RAND team assembled for the 154 New Hampshire elementary and unified school districts demonstrate that there is tremendous variability across communities in the extent to which the state's youngest children and their families face various risks and stressors. At one extreme, the indicators for birth outcomes, family demographics, and economic status show that some communities have no or few new mothers or young children facing adverse circumstances, median family incomes are as much as two times the state median, and the child poverty rate is below 5 percent. At the other extreme, about 40 districts (the 25 percent of districts with the worst outcomes) see half or more of new births to unmarried women and about one-third or more of new mothers living in near poverty. One-quarter of districts also have more than one in three children under age 5 in single-parent families. Median family income falls as low as 40 percent of the statewide median, and the child poverty rate reaches up to three times the state average.

New Hampshire has had a long track record of implementing home visiting, most recently using the Healthy Families America (HFA) evidence-based model supported by a federal MIECHV grant. Home visiting services are also provided through state contracts for Comprehensive Family Support Services (CFSS). Home visits may begin as early as the prenatal period. HFA continues until the child reaches age 3, and the CFSS home visits may continue until the child is age 21. A third funding stream, Early Head Start, includes a home-based option that involves home visiting from birth to age 3. The Early Head Start programs are found in 13 sites statewide located in Belknap, Hillsborough, Merrimack, and Strafford counties. New Hampshire has ten counties, and the agencies offering home visiting through HFA and CFSS contracts operate in all of them.

In most communities, the HFA and CDSS home visiting services are provided by one or more Family Resource Centers (FRCs), which also support other related support services for families with young children. (Some of those services may include a home visiting component.) This potentially allows for a more comprehensive set of services than what any given home visiting funding stream can support. At the same time, the programs are not necessarily following a specific evidence-based home visiting model or even a common model across FRCs.

Together, those three funding streams reach about 1,100 families per year, far below the estimated 9,200 families who could potentially benefit. Because of limitations on data access, it was not possible to map the location of the participating families and determine whether home visiting services in New Hampshire are concentrated in those communities where the need is greatest. Even without this information, given the potential need for home visiting services, it is evident that the current levels of funding are not sufficient to reach all families and children who could benefit.

New Hampshire has five Head Start grantee agencies that have programs across 35 communities covering much of the state. Extensive community needs assessments are used to ensure that Head Start sites are located where they can serve eligible children in the community and surrounding area. However, because the program is not fully funded to serve all eligible children, there are districts and clusters of districts with above-average child poverty rates with no Head Start program, especially in Coös, Carroll, and Grafton counties.

Beyond the enrollment count and counts of preschool-age children identified with special needs, little is known about the nature or quality of district preschool programs. The data gaps include the breakdown in preschool enrollments by age, special education status, and program hours and days. The four focal communities provide some insight into the nature of district preschool programs (with White Mountains Regional School district serving as the study's focus in Coös County):

Although the division of the state-level preschool enrollment total by special education status is not reported, other data indicate that the total preschool enrollment figure is higher than what would be expected if these district programs served only children with identified special needs. In particular, the RAND team estimates that about one in four grade 1 students, counting both students with special needs and their typically developing peers, were enrolled two years earlier in a district 4K program (i.e., one year before entering kindergarten) (see Table 1).

In addition to Head Start and district-funded preschool programs, licensed private home- and center-based child care and early learning programs also serve children one or two years prior to kindergarten entry, some in programs that provide high-quality learning environments. At present, information is not systematically collected from each licensed provider to record annual enrollments of preschool-age children and various program features (e.g., hours per week, weeks per year) and indicators of program quality.

New Hampshire's quality rating improvement system (QRIS) has rated about 26 percent of licensed centers in the middle quality tier known as Licensed Plus. That designation requires no direct observational assessment of quality, but instead relies on a document review against the QRIS standards. The top quality tier, reserved for programs accredited by the National Association for the Education of Young Children, is a more rigorous assessment of quality, but just 8 percent of licensed centers currently have that designation.

Thus, at least some of the private licensed programs are providing publicly subsidized high-quality preschool for their enrolled children, but the number of additional children served beyond those in Head Start and district programs is not readily known. Further, because Child Care Scholarship subsidy funds are not an entitlement, funding is not sufficient to reach all income-eligible children. In fact, estimates indicate that, at most, one in five 3- and 4-year-olds who meet the income requirement receives a child care subsidy. Those who receive a Child Care Scholarship may not be fully subsidized, as many families still face parent co-pays and provider fees to make up for the difference in the provider's fee rate and the reimbursement they receive from the Child Care Scholarship program. These fees may be unaffordable for some families or consume a large share of their budget.

Insights from Early Childhood Programs in the Focal Communities

The information gathered about home visiting and preschool education programs in the focal communities provides a deeper understanding of the varied strategies that communities are using as they implement programs locally — both innovative approaches and challenges. Promising strategies include the following:

Given the study's focus on four local communities with a high incidence of at-risk children, it may not be surprising that there are also commonalities in the challenges they face as they implement early childhood initiatives. The challenges include engaging children and families, recruiting and retaining qualified program staff, meeting needs for appropriate facilities, addressing potential displacement of services, undertaking program monitoring and evaluation, and building useful data systems.

The 2017 RAND study showed the expected economic returns from expanding evidence-based home visiting programs and high-quality preschool programs, also informed by research evidence. The findings in this study point to a strategic approach to these investments, namely focusing first on those communities with the greatest need but with current low rates of access to early childhood programs. This approach has the potential to maximize the return on the investment by starting with those children and families where there is the greatest potential to improve outcomes.

This approach is effectively targeting communities for future investment. However, targeting in this way does not preclude the implementation of universal programs within the identified communities, such as a voluntary initial home visit for all newborns or universal eligibility for publicly funded preschool delivered through schools or private programs. Within the universal programs, there may also be varied intensity of service options depending on a child's or family's need, such as continued home visiting services or more-specialized learning supports in a preschool program for children with special needs. Communities may also seek to tailor the evidence-based programs they offer to the context in their community.

A strategic approach to new investments in early childhood programs should include the following features: