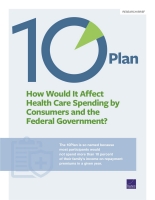 10Plan, How Would It Affect Health Care Spending by Consumers and the Federal Government

The 10Plan is so named because most participants would not spend more than 10 percent of their family's income on repayment premiums in a given year.

The 10Plan is an alternative health care financing approach. Proposed by Mark Cuban, the plan would cover the 28 million individuals who are uninsured and the nearly 20 million who purchase private coverage in the nongroup market, including on the Affordable Care Act (ACA) exchanges. Anyone not covered by employer-sponsored insurance, Medicaid, Medicare, or any other government plan would be eligible for the 10Plan.

The RAND Corporation assessed the 10Plan to determine how much it would cost the individuals and families participating in it and how much it would cost the federal government. Because the 10Plan allows payments for medical expenses to be spread over multiple years, understanding the plan's effects requires understanding the system dynamics around medical spending, income, and family structure over a 15-year period. RAND developed a microsimulation model that predicts individuals' medical expenditures over time under the 10Plan and under the status quo. The model accounts for changes in family structure, employment and income, health status, and other factors that influence expenditures and payments.

How does the 10Plan work?

The design of the 10Plan insulates participants from the financial uncertainty of health care costs.

Participants pay only for services that they use. Participants would seek care directly from participating providers, who would verify the patient's identity and eligibility. Patients would be billed for care at Medicare fee-for-service rates and pay a $25 copay for each visit. They can defer the balance and borrow from the federal government at a low interest rate, repaying it over time. They can also choose to pay the amount, in full, out of pocket.

If 10Plan participants choose to defer payments, the federal government would pay providers and initiate an automatic repayment system, drawing payments directly from paychecks. Unlike a typical loan, the balance would be bundled together with other qualifying 10Plan health care expenses over the course of the year and the repayment premiums would be capped based on family income.

The federal government would charge simple interest at a low rate. The 10Plan is so called because most participants will not spend more than 10 percent of their family's income on repayment premiums in a given year.

The repayment premiums would be applied to each expense until it is paid off. After 15 years, remaining balances would be forgiven, and the forgiveness would not be not considered taxable income.

Repayment would be stopped when an individual enrolls in Medicare or paused when an individual becomes eligible for Medicaid (although the 15-year repayment clock would continue to run). If 10Plan participants obtain employer-sponsored health insurance, they would still owe remaining balances from deferred payments under the 10Plan until those balances are repaid or until the participants reach age 65.

How might spending evolve under the 10Plan over a consumer's life?

Panel A of the chart below shows an example of the trajectory of a median-income individual who has age-adjusted median health care costs while single. His expenditures increase as he gets married, has a family, and ages. The trajectory includes health "shocks" (high-cost events) for childbirth and later in adulthood. The individual would be repaying health care costs every year, but these payments would never exceed 10 percent of family income.

Panel B shows the same hypothetical individual and his family, but one of the parents is diagnosed with a chronic health condition at age 36; expenditures are now at the 95th percentile of age-adjusted health care spending. In this case, the household defers significantly greater health care costs, but it never pays more than 10 percent of family income in repayment premiums. The federal government would end up forgiving a significant amount of those deferred payments by the time the high-spending individual ages into Medicare.

How would health care spending for families and individuals under the 10Plan compare with spending under the status quo?

Estimated health care expenditures also differed by the health status of 10Plan-eligible individuals. Overall, average total annual expenditures in year 15 would be about $144 more for 10Plan participants in good health, compared with the status quo. These participants would save about $2,087 per year in out-of-pocket costs. Those with acute and chronic conditions would have about $27 and $104 less in average total health care expenditures per year, respectively, under the 10Plan, relative to the status quo. Out-of-pocket costs are predicted to fall significantly for those with an acute and chronic condition, as well, by $1,368 and $1,213, respectively.

Another way to examine a family's burden under the 10Plan is to examine the fraction of income that would be spent on health care. Under the 10Plan, families are responsible for a $25 copayment for each health care interaction, in addition to a repayment premium toward the deferred balance from health interactions in previous years. The required annual repayment premium is capped at a percentage of family income that depends on the family's income as a percentage of the federal poverty level (FPL).

The RAND team found that lowest-income families (< 250 percent of FPL) effectively would pay between 3 and 4 percent of income toward the cost of health care under the 10Plan. For higher-income groups, the share of income is typically lower.

Despite the progressivity of the required repayment rates, the 10Plan is slightly regressive in practice. However, from the perspective of financial risk, the lower-income groups would experience less cost variability than they do under the status quo and would be protected from health care shocks.

RAND estimates that, over the 15-year period, health care spending under the status quo would total about $3.57 trillion relative to $3.53 trillion under the 10Plan. This amounts to about $33 billion in reduced total health care spending over the 15-year period because of the lower fee-for-service Medicare rates that 10Plan participants would pay.

How would the 10Plan affect federal spending?

But in year 15, when the government would begin to forgive the first set of deferred payments from year 1, it would spend about $3 billion per year. Year 15 provides the best estimate of federal expenses for the 10Plan over the longer term. Thus, the 10Plan is likely to continue to be a net expense to the federal government. Exactly how much of an expense depends on assumptions that the RAND team made in modeling the plan's effects.

The team estimated several versions of the dynamic microsimulation, varying different aspects of the assumptions. The estimates of the change in total health care spending relative to the status quo are most sensitive to the price levels that 10Plan-eligible families and individuals will face and less sensitive to the parameters and policy features tested in the other sensitivity analyses. In other words, the prices that the team assumed that 10Plan participants would face are the most significant factors in determining whether the 10Plan will generate savings. Assuming Medicare prices, as the team did for most of the results presented, the model suggests savings of $21.5 billion over 15 years, including administrative costs. However, if 10Plan participants face 234 percent of Medicare rates—as the state of Montana was able to negotiate with hospitals—then the model predicted increased spending of $1.263 billion compared with the status quo over 15 years. Even though Montana hospitals may not be representative of all hospitals in the United States, the RAND team expects that it may be difficult to get hospitals to accept rates lower than that.

The other modeling assumption that affects whether the team predicted savings from the 10Plan concerns forgiving loan balances at age 65. In the main model, the team did not assume any behavioral responses to this, but 10Plan participants would have an incentive to increase their consumption of health care (especially discretionary) as they approach age 65. In particular, knowing that they would not have to repay costs in subsequent years may affect their behavior. In one sensitivity check, the team increased health care utilization linearly from ages 51 to 64 to account for this possibility. In the model's estimates, the 10Plan, with Medicare prices, would increase total expenditures by $659 billion over 15 years relative to the status quo.

Overall, RAND estimated a savings in total health care spending among 10Plan participants of almost $33 billion over a 15-year period in our baseline model because of the lower prices that 10Plan participants would pay. The RAND team predicted that the plan would cover 46 million individuals, including approximately 28 million who are currently uninsured. The model with the most-costly assumptions predicted that aggregate health care spending would increase by $1,263 billion over the 15-year period (with a net increase in federal spending of $566 billion over the period).

On average, individuals covered by the 10Plan would spend less on health care and have lower out-of-pocket costs compared with the status quo. However, these amounts vary by family income, current health insurance status, and health status. Lower-income families would pay 3 to 4 percent of income on repayments and copays, which is more than what uninsured individuals in those income categories currently pay out of pocket for health care. In general, uninsured individuals would face greater out-of-pocket health care costs under the 10Plan, regardless of income. However, they would gain risk protection because they would not be required to pay more than their means-tested rate.

Higher-income individuals currently covered by a nongroup plan would pay less out of pocket because they would have no insurance premiums.

The 10Plan would change the federal government's cash flow. In particular, the government would increase outlays to cover individuals' health care spending when care is received, and then the government would receive repayment premiums to help cover these amounts in subsequent years. Some amounts would be forgiven after 15 years of repayment premiums, on death, or as individuals become eligible for Medicare. In the baseline model, the team predicted that the government would realize savings of about $1.4 billion per year, including administrative costs, but in the model with the most-costly assumptions, federal spending was predicted to increase by $38 billion per year. The most significant factor in determining whether the 10Plan will generate savings is the assumption that 10Plan participants will be charged for health services at the Medicare fee-for-service rate.

Many details of the 10Plan have not yet been specified and so were not included in RAND's assessment. And there are many uncertainties—for example, if providing coverage for those currently uninsured causes them to increase their health care use, it is unclear the extent to which the supply of providers might also change in response.

However, the 10Plan, as currently described, would help to address widespread anxiety about the burden of bills for necessary medical care. The 10Plan requires a contribution from patients toward their health care, but, unlike current cost-sharing arrangements where people pay the full cost when they receive care until they hit the deductible, the 10Plan allows deferred payments that can be paid back gradually, on a schedule. Furthermore, repayments are capped in a way that scales with income. In this way, the 10Plan would protect people who are unprepared for an unexpected bill without requiring the government to shoulder the entire burden.