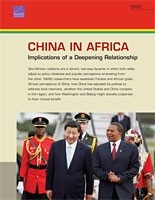 Implications of a Deepening Relationship 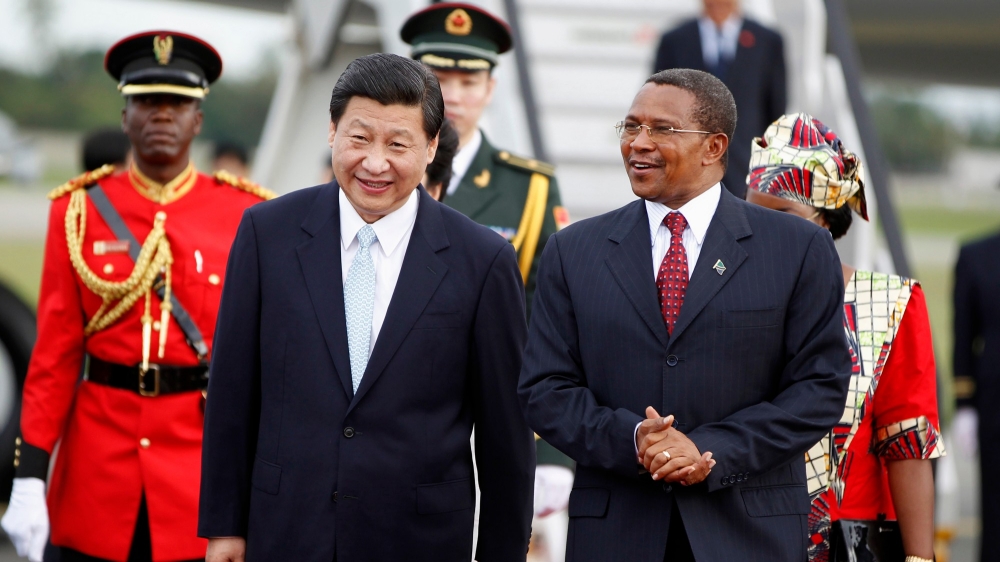 Sino-African relations are a vibrant, two-way dynamic in which both sides adjust to policy initiatives and popular perceptions emanating from the other. RAND researchers have assessed Chinese and African goals, African perceptions of China, how China has adjusted its policies to address local reactions, whether the United States and China compete in the region, and how Washington and Beijing might actually cooperate to their mutual benefit.

China's role in Africa defies conventional stereotypes and punchy news headlines. China is both a long-established diplomatic partner and a new investor in Africa. Chinese interests on the continent encompass not only natural resources but also issues of trade, security, diplomacy, and soft power. China is a major aid donor, but the scope, scale, and mode of Chinese aid practices are poorly understood and often misquoted in the press.

Most analyses of Chinese engagement with African nations focus on what China gets out of these partnerships — primarily natural resources and export markets. Some studies have described the impacts, positive and negative, that China's aid and investment policies have had on African countries. However, few analyses have approached Sino-African relations as a vibrant, two-way dynamic in which both sides adjust to policy initiatives and popular perceptions emanating from the other.

In an effort to characterize the dynamic nature of Chinese-African relations, RAND researchers took a comprehensive look at Chinese and African objectives in the political and economic spheres and the means by which they work to achieve their goals. They examined the reactions of African governments and populations to Chinese engagement and assessed the ways in which China adjusted its policies to accommodate these often-hostile responses. RAND also considered whether the United States and China are competing for influence, access, and resources in Africa and whether there might be opportunities for the two powers to cooperate in ways that advance their mutual interests, as well as those of their African partners. 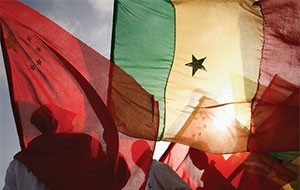 Men wave Chinese and Senegalese flags as they await the arrival of China's President Hu Jintao and his Senegalese counterpart in Dakar, Senegal, February 2009.

What Do China and Africa Want?

China has four overarching strategic interests in Africa. First, it wants access to natural resources, particularly oil and gas. It is estimated that, by 2020, China will import more oil worldwide than the United States. To guarantee future supply, China is heavily investing in the oil sectors in countries such as Sudan, Angola, and Nigeria. Second, investments in Africa, a huge market for Chinese exported goods, might facilitate China's efforts to restructure its own economy away from labor-intensive industries, especially as labor costs in China increase. 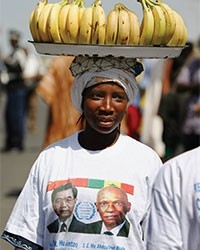 A Senegalese banana vendor wears a T-shirt showing China's President Hu Jintao and Senegalese leader Abdoulaye Wade along with the slogan "Together with China we will build a new world." February 2009.

African governments look to China to provide political recognition and legitimacy and to contribute to their economic development through aid, investment, infrastructure development, and trade. To some degree, many African leaders hope that China will interact with them in ways that the United States and other Western governments do not — by engaging economically without condescendingly preaching about good governance, for example, or by investing in high-risk projects or in remote regions that are not appealing to Western governments or companies. Some Africans aspire to replicate China's rapid economic development and believe that their nations can benefit from China's recent experience in lifting itself out of poverty.

How Have Africans Reacted to Chinese Engagement?

Some in Africa, however, are critical of Chinese engagement. Labor unions, civil society groups, and other segments of African societies criticize Chinese enterprises for poor labor conditions, unsustainable environmental practices, and job displacement. Good-governance watchdogs warn that China negotiates unfair deals that take advantage of African governments' relative weaknesses and that foster corruption and wasteful decisionmaking. In their view, China perpetuates a neo-colonial relationship in which Africa exports raw materials to China in exchange for manufactured goods. In some countries, resentment at Chinese business practices has led to popular protests and violence against Chinese businessmen and migrants. 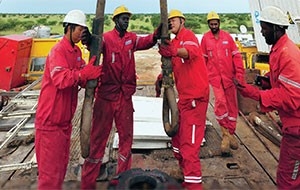 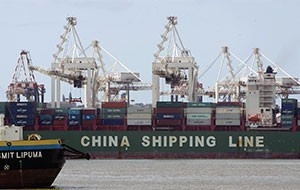 A ship from China is loaded with containers in the port in Durban, South Africa, November 2011. 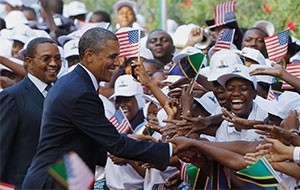 How Has China Accommodated the African Reaction?

Beijing has adjusted its policies to assuage Africans' concerns and put the Sino-African relationship on a more balanced footing. These modifications include a greater emphasis on "sustainability" in the economic and trade relationship; the promotion of Chinese soft power, culture, and people-to-people exchanges; and proactive engagement in the security and stability of conflict-prone areas in Africa. Such adjustments represent an understanding among Chinese elites that China's increasing presence on the continent is producing negative consequences that must be addressed. Beijing's adjustments have the potential to benefit both China and its African partners. Closer cultural ties and aggressive outreach will likely foster broader public support for China; the resulting favorable climate will enable Chinese investments to continue securing natural resources and generating profits while also contributing increasingly to local job creation and economic development.

The U.S. Role: Competition or Cooperation?

Chinese engagement in Africa is primarily concerned with natural resource extraction, infrastructure development, and manufacturing. U.S. engagement, in contrast, concentrates on higher-technology trade and services, as well as on aid policies aimed at promoting democracy, good governance, and human development. While China's "no strings attached" approach may foster inefficient decisionmaking and official corruption, Chinese engagement does not fundamentally undermine U.S. economic and political goals on the continent. On the contrary, Chinese-built infrastructure helps reduce businesses' operating costs and expand the size of regional markets, increasing opportunities for profitable ventures by indigenous and U.S. investors. U.S. and Chinese approaches and interests do not inherently contradict each other, and U.S. officials, including Presidents George W. Bush and Barack Obama, have denied that Washington and Beijing are engaged in a "zero sum" competition for influence and access in Africa. In short, China is not necessarily a strategic "threat" to U.S. interests in Africa.

While the United States and China may not be strategic rivals in Africa, the two countries could increasingly compete commercially if American businesses become more engaged in African markets — something that President Obama clearly hopes to foster though the multiple trade- and infrastructure-related initiatives he announced during his summer 2013 trip to Senegal, South Africa, and Tanzania. Such business competition would benefit African countries and advance U.S. interests. African governments might be able to negotiate more favorable commercial terms if they are not beholden to Chinese financing. African communities would benefit, as American companies are more likely than their Chinese counterparts to hire local laborers for skilled and unskilled positions, transfer industrial technologies to local partners, require humane working conditions, and contribute to initiatives that promote the health and welfare of their workforce. Such business practices would likely encourage Chinese enterprises to do the same so as to secure deals, compete in local labor and consumer markets, and enhance China's image in Africa.