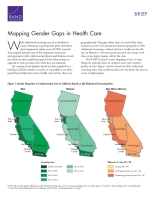 While cholesterol screening may be as familiar to many Americans as getting their pulse checked or their temperature taken, recent RAND research that mapped regional rates of this important annual test among patients with cardiovascular disease and diabetes reveals that there are often significant gaps in how often women, as opposed to men, get these tests when they are indicated.

By creating visual displays based on data supplied by a leading California health care plan, it is possible to see these gender-based disparities more vividly and see how they vary geographically. The gaps where men are more likely than women to receive the annual low-density lipoprotein (LDL) cholesterol screening — when both have cardiovascular disease or diabetes — are more pronounced at the county level than across larger regions within the state.

The RAND research team's mapping of care is something not typically done to compare men's and women's quality of care. Figure 1 shows, based on LDL cholesterol screening rates, that cardiovascular care was better for men in seven of eight regions.

For diabetes, which does not have a history as a disease primarily affecting men, the gaps in care were smaller but still favored men in five of eight regions (Figure 2).

Differences in whether women versus men receive cholesterol tests raise larger, important questions about gender inequity in quality and outcomes of health care, particularly for cardiovascular disease. Cardiovascular disease is the leading cause of death in women: 1 in 3 adult women are afflicted with it, and 1 in 3 women die because of it. Diabetes, which takes its own considerable toll on the health of men and women, is also a major cardiovascular disease risk factor that increases risk among women more than men.

At the county level, visual displays show the gender gaps in the most pronounced fashion (Figure 3). For cardiovascular disease, the maps show the following disparities:

For diabetes, the following disparities are seen:

The extent of local variation in care for men versus women is clearest when similar maps are prepared for densely populated areas where the majority of zip codes have sufficient cases to estimate gender gaps.

More gender-related health and health care data could be collected, analyzed, and reported within and across provider groups and health plans to identify the size and location of gender gaps. Making the findings accessible and widely available by mapping the gaps can help guide health care decisionmakers and local stakeholders in their efforts to improve quality. All California health care plans and provider groups may wish to consider assessing and reporting gender differences in quality of care for cardiovascular disease and diabetes and using mapping to make the information both visible and actionable.