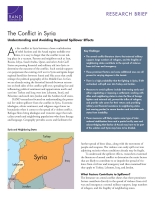 The Conflict in Syria

As the conflict in Syria between a loose confederation of rebel factions and the Assad regime unfolds over time, it is easy to forget that the conflict is not taking place in a vacuum. Patrons and neighbors such as Iran, Russia, Libya, Saudi Arabia, Qatar, and other Arab Gulf States are pouring financial and military aid into Syria to determine the outcome of the conflict. Such outside support can perpetuate the existing civil war in Syria and ignite larger regional hostilities between Sunni and Shia areas that could reshape the political geography of the Middle East. In fact, we are already seeing the historical hatreds between extremists on both sides of the conflict spill over, spreading fear and influencing political sentiment and opportunism north and east into Turkey and Iraq; west into Lebanon, Israel, and Palestine; and south into Jordan and the Arabian Gulf states.

RAND researchers focused on understanding the potential for violent spillover from the conflict in Syria. Extremist ideologies, ethnic sentiment, and religious anger know no boundaries when it comes to the spread of a violent conflict. Refugee flows bring ideologies and transmit anger that radicalizes youth and neighboring populations who share lineage and language. Geography provides access and facilitates the further spread of these ideas, along with the movement of people and weapons. The violence can easily spill over into adjoining societies where conditions already may be fragile.

To understand the spillover effects, researchers examined the literature of armed conflict to determine the main factors that are likely to contribute to or impede the spread of violence from civil war and insurgency and then examined how they apply to Turkey, Lebanon, Iraq, and Jordan.

What Factors Contribute to Spillover?

The literature on armed conflict shows that three prominent factors contribute directly to the spread of violence from civil war and insurgency: external military support, large numbers of refugees, and the fragility of neighboring states.

Beyond these prominent factors, five other factors can contribute conflict spillover: ethnic ties, access to open media, perceived uncertainty and government overreaction by neighbors, timing and effectiveness of intervention, and government and insurgent capabilities. 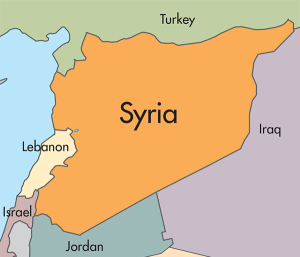 What Is the Current Situation in the Region?

All the factors leading to the spread of violent conflict from civil war and insurgency — both the prominent and other ones — are present in varying degrees in the Levant. There is a high probability that the fighting in Syria, if left unchecked, will spill over into Turkey and Jordan; both countries are engaged in providing external aid to the rebels and both are serving as hosts to large numbers of refugees with ethnic ties to their own populations. Jordan is especially vulnerable because of its fragile economic condition and the potential political impact of demographic changes within its society.

Violence has already spread into Lebanon because of the support Hizbollah is giving to the Assad regime in Damascus, and appears to be contributing to the ever-present and complicated sectarian conflict between Sunni and Shia in Iraq. The strengthening of militant groups like al Qaeda and Jabhat al-Nusra in the border areas inside eastern Syria and western Iraq does not bode well for the stability of Baghdad or the region, which is viewed best as an extended part of an interconnected, dynamic whole and as a perceived battle for survival between Sunni and Shia, as well as an opportunity for either side to attack Israel. The tight geography of the region, where everyone is in close proximity, makes spillover easier and more likely.

How Can We Avoid Spillover?

To impede the spillover of violence now occurring in Lebanon and Iraq and to reverse the likelihood of it spreading into Turkey and Jordan, the underlying causes of the spillover in the region must be addressed. Based on the literature and an analysis of the factors at play in the Levant, it is necessary to:

Policy measures focused solely on addressing the effects of the spillover itself, such as helping Turkey, Lebanon, and Jordan deal with the flow of refugees within their borders, are likely to be insufficient — the equivalent of a doctor treating only the visible symptoms of an infectious disease, while the patient and others nearby continue to be at risk.

All roads lead to Damascus and back out again, but in different ways and directions. With hundreds of jihadists from Europe, Russia, the Gulf states, and the United States fighting in Syria, Europe and the rest of the West and Arab Gulf States will become likely return destinations for them and the skills they have acquired.