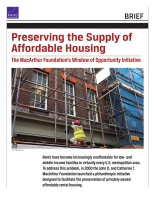 Preserving the Supply of Affordable Housing 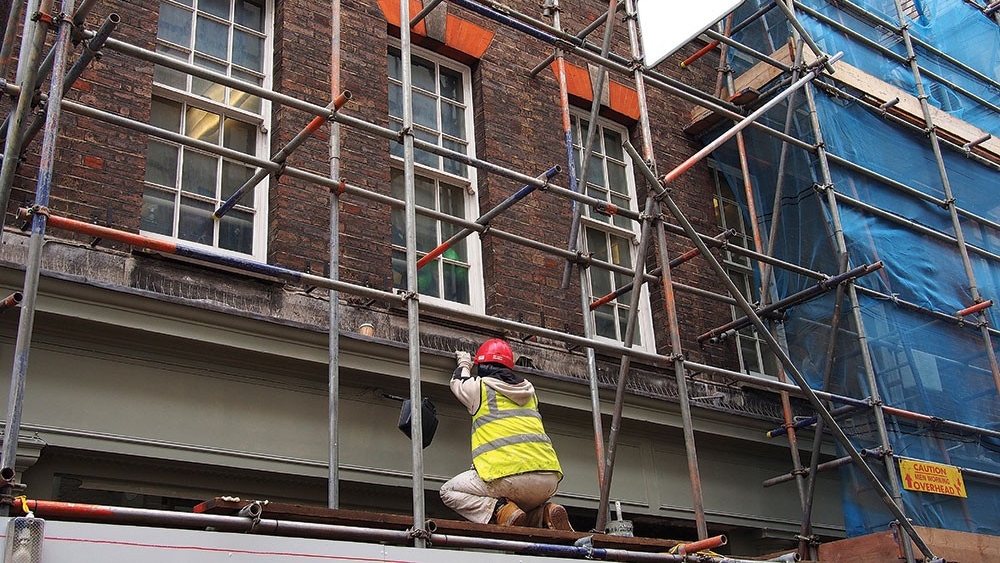 Rents have become increasingly unaffordable for low- and middle-income families in virtually every U.S. metropolitan area. To address this problem, in 2000 the John D. and Catherine T. MacArthur Foundation launched a philanthropic initiative designed to facilitate the preservation of privately owned affordable rental housing.

This initiative, called Window of Opportunity (WOO), is a 20-year effort in which the foundation has issued $187 million in grants and other financial tools, such as loans, guarantees, and equity investments to nonprofit developers, loan funds, networks of nonprofit owners of affordable rental housing, advocacy organizations, state and local government agencies, and researchers. The foundation's goal was to help secure a policy framework to mitigate, and perhaps even reverse, the projected loss of affordable rental housing.

In 2014, the MacArthur Foundation hired a team of researchers from the RAND Corporation and the University of Southern California Lusk Center for Real Estate to evaluate whether the WOO initiative has realized its goals and to identify lessons for effective preservation practices and future philanthropic activities.

The evaluation found that the WOO initiative has achieved most of its goals and made some progress on others, although the initiative is not on track to achieve its ambitious targets for affordable housing units preserved. The table summarizes the research team's findings.

Outcomes from Window of Opportunity

There was strong consensus — among developers, advocates, lenders, researchers, philanthropies, and MacArthur Foundation staff interviewed as part of the evaluation — that WOO investments have been important in helping build the capacity and scale of nonprofit owner borrowers. These owners are now larger, more sophisticated, better connected to financing, better positioned to partner with resident service organizations, and using a more sustainable business model. MacArthur Foundation investments in peer networks also helped owners share best practices and advocate for preservation at the state and federal levels.

Some New Financing Structures for Preservation

WOO has had modest success in helping to create new and innovative financing structures for preservation, such as the first-of-its-kind real estate investment trust. All 20 of the organizations and "special-purpose vehicles" that have received WOO funds have met or are meeting their loan performance benchmarks, and more capital is available for preservation than before WOO began. However, none of the new vehicles has become a common industry tool, and there are few new sources of permanent funds for preservation.

Modest Success in Building a Policy Framework for Preservation

The foundation's goal was to help secure a policy framework to mitigate, and perhaps even reverse, the projected loss of affordable rental housing.

Achieving Greater Awareness of and Involvement in Preservation

Interviewees agreed that policymakers within HUD and the Treasury Department under the Obama administration, as well as state housing finance agency leaders, have shown greater awareness of preservation since WOO began. But interviewees disagreed about greater awareness among elected officials and appointees outside of that group, with experts in high-cost housing markets tending to report that policymakers and elected officials "got" preservation, and experts in lower-cost markets tending to report the opposite.

Initiative Not on Track to Meet Targets for Preserving Affordable Housing

Although WOO created meaningful, positive changes for preservation, the initiative is not on track to achieve its targets of (1) preserving 1 million affordable rental housing units between 2010 and 2020 through the creation of a broad policy framework for preservation and (2) preserving 300,000 units specifically through the activities of WOO loan or grant recipients. One recent estimate, based on data from the National Housing Trust, suggests that, nationwide, approximately 400,000 affordable rental units will be preserved by 2020 through the Low Income Housing Tax Credit program. In terms of WOO recipients, owner/developers and preservation-oriented special-purpose vehicles that received WOO grants or loans have preserved approximately 150,000 units to date.

There are several reasons why the initiative's ambitious targets likely will not be met, including economic forces affecting the housing market, the lack of housing-related legislative action in Congress, and insufficient data on preservation. Further, the nonprofit preservation owners targeted by the initiative make up only a small segment of the affordable renting housing sector.

Lessons for the MacArthur Foundation and Other Philanthropies

The evaluation team identified six lessons for philanthropies considering the design of future initiatives, whether or not they pertain to housing.

The "Sandwich Model" of Funding Can Be Mutually Reinforcing

Experts familiar with WOO stressed the importance of the initiative's combination of top-down and bottom-up investments to support preservation transactions, policy work, data collection, and networking among nonprofit preservation owners.

The Public Commitment to Long-Term Investing Enhanced the Initiative's Effectiveness

WOO provided time for recipients to build capacity and to innovate. Knowing that the MacArthur Foundation was going to "stick with it" allowed organizations to undertake long-term plans, react to what they learned, and make improvements.

The Initiative Enabled Practitioners to Accelerate and Expand Their Work

Through its grants and loans, the MacArthur Foundation sent a powerful signal that boosted the salience of affordable housing preservation and provided a seal of approval that helped WOO beneficiaries raise additional funds.

Several interviewees emphasized that the MacArthur Foundation was good at "picking the [right] bet." This ability was premised on program officers' knowledge of the people involved in preservation, as well as real estate finance and affordable housing policy.

Measurable Objectives That Align to the Philanthropic Initiative Are Most Effective

In this area, the WOO initiative fell short, in that it had few metrics to assess whether it was on track to meet its goals. The initiative's design did not allow for clear assessment of the impact of the foundation's investments, and some of the foundation's goal statements were both difficult to measure (e.g., "improving the policy space for preservation") and pertained to preservation at large, which exceeded the scope of WOO.

While issuing competitive solicitations, such as requests for proposals, imposes costs on a foundation to vet applications and make selections, in the case of WOO it was an effective way for the MacArthur Foundation to learn about the field. These solicitations also encouraged nonprofit developers/owners and state agencies either to enter preservation or to accelerate or expand their preservation activity.