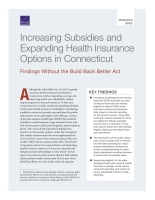 Findings Without the Build Back Better Act

Although the Affordable Care Act (ACA) greatly increased health insurance enrollment in Connecticut, further expanding coverage and improving health care affordability remain important goals for state policymakers. To that end, Connecticut has recently considered expanding subsidies on the state's health insurance marketplace; introducing a publicly contracted, privately operated plan (the public option plan) on the marketplace; and offering a version of the state employee health plan (SEHP) that would be available to small businesses, large nonprofit firms, and Taft-Hartley plans (collectively bargained, multi-employer plans). This research brief describes findings from research on these policy options, under the assumption that subsidy enhancements that were implemented for 2021 and 2022 as part of the American Rescue Plan Act of 2021 (ARP) will not continue after 2022. The RAND Corporation report Increasing Subsidies and Expanding Health Insurance Options in Connecticut describes the background and methodology in finer detail.[1] In that report, the primary results assume that the ARP subsidy enhancements would continue past 2022 as part of the Build Back Better Act; the results under the opposite assumption (that the ARP subsidy enhancements would not continue past 2022) are included in the appendixes of that report and are highlighted in this research brief.

A team of RAND researchers used the RAND COMPARE microsimulation model to examine health insurance enrollment, premiums, consumer spending, and state spending associated with each of the following scenarios for the year 2023:[2]

The researchers modeled a public option plan that would be offered both on and off the marketplace, with payment rates set at 125 percent of Medicare rates, or about 90 percent of commercial rates currently paid by marketplace plans.

The research team also studied the impacts of a set of reforms that would aim to make employer insurance more affordable by allowing small businesses, large nonprofit businesses, and Taft-Hartley plans to offer a plan resembling the existing SEHP. Similar to the analysis of the individual market, researchers analyzed health insurance enrollment, premiums, consumer spending, and state spending in 2023 for each of the following scenarios:

In Scenario 2.a, in which people with incomes between 200 and 400 percent of FPL are offered enhanced CSRs, total insurance coverage was lower than under current law. This counterintuitive result stems from the effects of federally funded CSRs on premiums. Because of the Trump administration's decision to halt federal CSR payments, federal CSR costs for people with incomes under 250 percent of FPL are loaded onto the silver marketplace plans, increasing the benchmark premium. In turn, the higher premium increases advance premium tax credits (APTCs), giving consumers more purchasing power. Unlike federal CSRs, state-sponsored CSRs would not be loaded onto silver premiums; they would be paid directly by Connecticut. By offering state-sponsored CSRs, the state would attract people who are not eligible for federal CSRs onto silver marketplace plans. The influx of additional people into the silver tier who are ineligible for federal CSRs would spread federal CSR costs across a larger number of enrollees, diluting the effects of federal CSR loading on premiums and reducing the value of APTCs. Hence, the team estimated that purchasing power would decline for some consumers, and they would opt not to enroll. In Scenario 2.b, total insurance coverage is higher than under current law, due to increased individual market enrollment among the unsubsidized when the lower-cost public option is offered.

For Subsidized Enrollees, More-Generous Subsidies Led to Reductions in Consumer Spending, While the Public Option Plan Led to Increases

Among subsidized individuals enrolled in the individual market under current law, consumer spending fell when more-generous subsidies were introduced under Scenarios 1.a and 2.a (Table 2). However, the introduction of the public option plan reduced the value of subsidies for these individuals, leading to an increase in consumer spending relative to current law under Scenarios 1.b and 2.b. Among unsubsidized individuals, spending increased or remained constant when subsidies became more generous for others, but spending fell when the public option was introduced. We note that increased spending does not necessarily imply that consumers are worse off, or vice versa; increases in spending can reflect higher premiums or cost-sharing but can also reflect increased health care utilization and moves to more-generous plan types.

The analyses showed that total insurance enrollment increased by 5,500 to 6,900 compared with current law across the four SEHP scenarios. There were no substantial differences in this finding across the scenarios.

Costs to the State Were Minimal

Overall, these analyses suggest that expanding eligibility for the SEHP holds promise for stabilizing or reducing consumer costs, improving plan generosity, and bringing more people into the market. This finding was driven by the lower administrative costs associated with the SEHP. The effects of options to enhance affordability on the individual market were less clear-cut. In some cases, such policies can have unintended effects, due to interactions with existing ACA policies. In particular, offering enhanced CSRs brought more people onto the marketplace silver tier, which diluted the effect of CSR loading, thereby reducing the value of APTCs. To avoid this issue, state policymakers could consider offering state-funded CSRs to those with incomes above 250 percent of FPL on the gold tier rather than on the silver tier. While adding a public option unambiguously increased health insurance enrollment, not everyone benefited from this policy. Specifically, the addition of a low-cost public plan on the marketplaces reduced the value of premium subsidies, lowering purchasing power for people with incomes below 400 percent of FPL. In theory, this issue could be avoided by offering the public option plan on the bronze and gold tiers only; however, this would require a waiver or change to federal law to implement. Alternatively, because the introduction of the public option plan would lead to federal APTC savings, the state could apply for a waiver to use the federal savings toward reducing costs for low-income individuals.