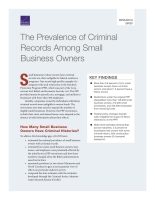 The Prevalence of Criminal Records Among Small Business Owners

Small businesses whose owners have criminal records are often ineligible for federal assistance programs. One recent high-profile example of a program with such restrictions is the Paycheck Protection Program (PPP), which was part of the Coronavirus Aid, Relief, and Economic Security Act. The PPP provided money for payroll, rent, mortgage, and utilities to businesses with fewer than 500 employees.

Initially, companies owned by individuals with felony criminal records were ineligible to receive funds. The restrictions were later eased to expand the number of eligible small businesses. However, the PPP restrictions, in both their strict and relaxed forms, were adopted in the absence of solid information about their effects.

How Many Small Business Owners Have Criminal Histories?

To address this knowledge gap, a RAND team

The analysis presents the first-ever national estimate of U.S. small business owners who have criminal records. The researchers used information from a data-aggregation company that collects and organizes data on business ownership and criminal history records, linking individual criminal records with information about company ownership. To obtain a more granular estimate, researchers used data from a different source to estimate prevalence numbers in two states (Minnesota and North Carolina) and used these data to examine how estimates vary by industry sector.

How Many Business Owners, Businesses, and Employees Are Affected by PPP Restrictions?

As shown in Figure 1, the original PPP restrictions disqualified

The national prevalence rate among all businesses was 0.47 percent.

Approximately 241,000 more businesses were eligible for the PPP under the revised restrictions.

Using data on two states—Minnesota and North Carolina—researchers examined prevalence rates by industry sector. They focused on the construction and hospitality industries, which were expected to be most affected by felony restrictions. Approximately 3.4 percent of the owners of construction small businesses and 2.5 percent of the owners of hospitality businesses had some criminal history (Figure 2). Overall, 2.5 percent of owners across all other industries had some criminal history. Of those, less than 1 percent had felony records and less than 0.3 percent had a felony within the past five years.

The researchers found that an estimated 3.8 percent of small business owners nationwide have a criminal record. Approximately 0.5 percent of small businesses were disqualified from benefits under the original PPP rules; under the relaxed rules, this prevalence fell to 0.03 percent, and the revised rules would allow up to 201,000 more businesses and an additional 326,000 employees to benefit from the program. Some owners and businesses will benefit more than others. Although we do not have complete data on race, our estimates suggest that 24 percent of businesses affected by the original restrictions were owned by African-Americans.

This analysis makes unique use of large-scale commercial small business and criminal history record information. To the best of our knowledge, this is the first time this kind of data has been used by researchers to generate national estimates of the prevalence of criminal records in the United States. A main challenge with this type of estimate is the limited information about the completeness of the criminal history records from the aggregator across states. A comparison of the prevalence estimates showed that many states with the lowest estimates were also states for which the aggregator did not have statewide court information. Further documentation of the strengths and weaknesses of the commercially aggregated data would make similar analyses more valuable in the future.