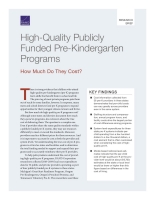 How Much Do They Cost?

There is strong evidence that children who attend high-quality pre-kindergarten (pre-K) programs learn skills that benefit them in school and life. The price tag of most private programs puts them out of reach for some families, however. In response, many states and school districts fund pre-K programs to expand opportunities for their youngest citizens to learn and thrive.

But how much do high-quality pre-K programs cost? Although some states and districts document how much they spend on programs, less is known about the true cost of delivering them. The question is a complex one. Even if providers share the same quality standards within a publicly funded pre-K system, they may use resources differently to meet or exceed the standards. Moreover, providers may face different prices for those resources. And it is important to account for cost at both the provider and system levels. Yet understanding the true cost of pre-K programs is critical as states and localities seek to determine the total funding needed to support and expand their programs and to accurately reimburse their pre-K providers.

To help policymakers understand the cost of providing high-quality pre-K programs, RAND Corporation researchers collected 2018–2019 fiscal year expenditure data for 36 public and private providers operating as part of four publicly funded pre-K systems in three states: Michigan's Great Start Readiness Program, Oregon Pre-Kindergarten, Oregon's Preschool Promise, and Tennessee's Voluntary Pre-K. The researchers used these provider-level data, along with state-level expenditure data from the two pre-K systems in Oregon and from Washington state's Early Childhood Education and Assistance Program, to generate per-child estimates of total provider costs, as well as expected system costs (i.e., the resources at the state or district level that support the pre-K program at the provider level). The researchers also developed a cost model that was used to estimate per-child pre-K cost at the national, state, or local level for the focal pre-K systems already mentioned, as well as Universal Pre-K Boston and Oklahoma's Early Childhood Four-Year-Old Program. The findings from the study can be used by policy-makers as they strive to continue making high-quality pre-K programs accessible for all families.

The publicly funded pre-K systems included in the study reflect the variety of pre-K programming available in the United States for preschool-age children. Along with geographic differences that exemplify higher- and lower-cost regions, the systems that were studied fund both public and private providers that operate between 2.5 and 6.5 hours per day for 4 to 5 days per week during an academic year and employ lead teachers with required credentials ranging from a two-year associate's degree to a four-year bachelor's degree. The programs are different in terms of other quality standards as well: Some have reached the highest standards recognized in the field (e.g., those endorsed by the National Institute for Early Education Research), while others are still striving.

The study team used two complementary approaches to understand the true cost of the programs. The first, cost data collection, required the team to obtain information from providers and system-level agencies about the resources they used to deliver pre-K programs during the 2018–2019 fiscal year. These costs included classroom staff salaries and benefits, classroom materials and supplies, administrative support, rent, and utilities; the team also sought information on and valued the in-kind resources used to deliver the programs, such as volunteer time and donated space. Provider and agency expenditure data are costly to collect and often imperfect, however, so the team employed cost modeling to generate per-child pre-K program cost estimates that are based on assumptions about the resources used and their prices. The assumptions were informed by what was observed in the data collected from providers.

Per-child costs can vary greatly across providers, even in one system. Data collected from 36 pre-K providers in four systems included in the study (the two systems in Oregon and one each in Michigan and Tennessee) revealed how per-child costs can vary across providers within the same system. For example, the cost ranged from $6.05 to $12.30 per child-hour across 14 providers in Michigan's Great Start Readiness Program. Across nine Oregon providers in either Oregon Pre-Kindergarten or Preschool Promise, the range was even wider, doubling between the lowest-cost provider ($7.90 per child-hour) and the highest-cost provider ($17.09 per child-hour) in the sample. These estimates are based on data collected from a small number of providers in each system, which were purposefully selected to capture variation in costs across provider types, geographic locations, and other factors. Such variation presents a challenge for pre-K system administrators when it comes to reimbursing providers for their true per-child costs.

Four program components drive most cost differences. After adjusting for regional price variation, the cost differences both within and across pre-K systems can be attributed to four key components: staffing structure, staff compensation, annual program hours, and facility costs. Among these, staff compensation—typically the largest cost component—has a tendency to vary by thousands of dollars on a per-child basis. Within a given system, the amount of spending per child by providers in the study varied by as much as $7,500 for classroom personnel and by as much as $5,300 for administrative and support staff. Facility costs, including leasing or rental fees, utilities, maintenance, and repairs, showed substantial variation across providers, with differences also in the thousands of dollars per child.

Resources deployed at the system level to support pre-K systems further add to per-child cost. Among the three systems for which the researchers collected system-level information (the two systems in Oregon plus one in Washington), there was a wide range in estimated per-child cost, from a few hundred dollars to a few thousand dollars. This variation reflects choices made by system administrators regarding the amount of support to provide in such areas as curricula and other pedagogical resources, workforce professional development, quality assessment and improvement, and data systems. On a per-child basis, such costs may be higher for newly established, smaller systems and lower for more-mature, larger systems.

Model-based national-level estimates indicate that the per-child cost of high-quality pre-K for an academic year at the provider level is about $12,700. This estimate (see the figure) is based on assuming a set of common high-quality features and national-level prices (which adjust for price differences at the regional level).[1] This estimate would be higher if a more comprehensive set of services were provided (as in Head Start), and the estimate would be lower if the quality features were lessened (e.g., a higher group size or higher teacher-child ratio). Model-based estimates at the state level are above or below this national estimate because of differences in the cost of living (see the figure for the estimates for the focal pre-K systems included in the study). Although the cost model includes administrative support at the district level for school-based programs, it does not account for other system-level elements, such as professional development, quality improvement, and data systems. These would be expected to add further to the cost estimates presented here.

The use of a cost model and an assumed set of program features provides an expected national-level cost per child at the provider level for high-quality pre-K and may be replicated for other jurisdictions. When considering such estimates, policymakers should remember that substantial resources may be required at the system level, which would be expected to add to the estimated cost per child. However, even assuming that all program requirements are met, policymakers should expect the cost for any given provider to deviate from the expected cost, even within the same system. This has implications for policies on reimbursement, which may be a fixed amount regardless of the provider type or other characteristics.

Collecting cost information from pre-K providers is also informative but ultimately is a complex endeavor. Not all providers have the time, tools, and capacity for accurate and complete financial recordkeeping. Going forward, those needing analyses of the actual costs of public pre-K programs might consider adopting a set of standard accounting practices across all publicly funded programs in their jurisdiction. With standardized accounting practices at the provider level, information on total or per-child expenditures can be monitored by program leaders in real time against budgets, and fiscal year summaries can be generated for internal decisionmaking, contractual reporting, and cost reimbursement.

The research described in this report was conducted by RAND Education and Labor and RAND Social and Economic Well-Being and supported by the Bill & Melinda Gates Foundation.