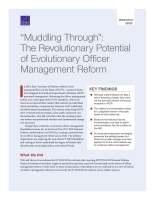 In 2015, then–Secretary of Defense Ashton Carter announced Force of the Future (FOTF)—a series of initiatives designed to transform Department of Defense (DoD) personnel management. Reforming the officer management system was a main goal of the FOTF initiatives, which centered on an internal labor market that matched up individual talent and military requirements. However, DoD scaled back the effort almost immediately. The reforms underlying FOTF drew criticism from lawmakers, their staffs, and senior uniformed leaders, who did not believe that the existing system was broken and questioned whether such fundamental change was necessary.

Despite these criticisms, several new officer management flexibilities became law in the Fiscal Year (FY) 2019 National Defense Authorization Act (NDAA), creating a renewed interest in officer management reform across DoD. The military departments are exploring the uses of the FY 2019 flexibilities and seeking to better understand the degree of latitude that already exists across legal, policy, and cultural fronts.

Why did the services embrace the FY 2019 NDAA reforms after rejecting FOTF? RAND National Defense Research Institute researchers sought to answer that question as part of a broad study on the future of officer management reform. In this brief, we draw on discussions with military service staff and on a review of historical officer management reforms to reveal why the FY 2019 NDAA were a relative success.

Overall, we found that cultural bias was not the dominant factor in the poor reception to FOTF. Rather, military organizations had a well-documented rationale for practicing incrementalism in officer management, instead of implementing comprehensive changes on the scale promised by FOTF.

Cultural biases were suggested as an explanation for the poor reception of FOTF: Military leaders did not want to break with practices that led to their own promotions, or uniformed leaders were reluctant to embrace reforms pushed on them by civilian DoD leadership, preferring reforms that developed organically from within the services to meet specific warfighting needs.

Cultural biases can play a role in thwarting officer management reform more broadly, and the RAND study revealed that cultural considerations were the most prominent constraint on officer management reform. However, discussions with service staff and our historical review of innovation in the officer management system reveal that the preference for the more-flexible FY 2019 NDAA reforms stems from a more pragmatic explanation: the basic desire of military organizations to drive down risk.

Specifically, organizations seek to maximize their expected utility—i.e., power, prestige, and resources—while minimizing uncertainty by adopting routine processes that reinforce shared values and accepted facts. This is particularly true for military organizations, which perform inherently high-risk missions in highly uncertain threat environments. Innovation in military organizations often occurs incrementally; in other words, military organizations have extra incentives to "muddle through" (as coined by Charles Lindblom in his 1959 journal article, "The Science of Muddling Through") reform instead of adopting comprehensive changes—like those proposed in FOTF—quickly.

Organizations may resort to incremental change because it is impossible to know everything about a problem. Given Herbert Simon's notion of the "bounded rationality" of organizations, which operate based only on available information, organization staff can only tackle parts of problem at a time; in the absence of complete information, it is difficult to effectively execute a comprehensive change all at once. Additionally, executing multiple, interacting changes simultaneously makes it difficult to predict beforehand or ascertain in hindsight the particular effect of each individual element of change.

Incrementalism—focusing on part of a particular problem—allows organizations to gather available information, make small changes to the status quo, and measure the relative effectiveness of these changes before deciding whether to go any further. Because these changes are limited, the potential for unanticipated second- and third-order effects is also limited. This, in turn, reduces the odds that changes will have outsized effects or interact with other changes in unexpected ways. For example, service staff revealed that they wanted to move slowly on a new alternative promotion authority because of concern about such effects.

Incrementalism may be particularly attractive to military organizations because they cannot fully test the merit of existing organizations and procedures—let alone the merit of alternative ones—outside of the battlefield. Private-sector organizations can test new ideas in particular market segments, but military institutions must rely on imperfect wargames, simulations, and modeling to predict if new policies will achieve their organizational aim: winning wars.

Another benefit of incrementalism is that it creates a standard—a change's effect relative to the status quo—for measuring the effectiveness of incremental change. In contrast, comprehensive changes may be so dramatic that they preclude effective measurement. In peacetime, these innovations may, at best, appear to be "solutions in search of a problem," until they can be proven in the crucible of battle. At worst, they may generate unanticipated second- and third-order impacts, not all of them positive. In wartime, it may be difficult to isolate the importance of any particular change—incremental or comprehensive—in the officer management system relative to the myriad other factors that shape battlespace outcomes. However, in peacetime, incremental change provides a way to assess change against the status quo and minimize the risk of unintended consequences; it also provides a way to more safely assess the effect of changes in wartime, because smaller changes minimize the potential risk of failure on the battlefield.

Incrementalism Can Lead to Significant Innovation

Although incrementalism does not immediately lend itself to comprehensive change, its cumulative effect can be significant innovation. It is difficult to identify a case of successful officer management reform that was not incremental. The decision to switch from selective service to an all-volunteer force (AVF) is an example of a military innovation that involved a series of incremental insights, which led to incremental changes and, over time, to a paradigm shift. The emergence of the AVF began with the accretion of new information over a period of years, which established the foundational evidence required for a wholesale shift in thinking. The old paradigm of selective service, which lasted from 1948 to 1973, fell under growing scrutiny in the early 1960s for a variety of reasons, including perceptions that deferments were out of control, that a draft system was at odds with a free society, that men should not have to serve in the unpopular Vietnam War, and that discipline problems among conscripts were mounting.

A series of studies, most notably the work by the Gates Commission, provided the scientific evidence to support a move away from conscription. It was perhaps not surprising that the evidence pointed to this conclusion; a large proportion of military accessions were already voluntary, in keeping with the American tradition of avoiding conscription. The shift was therefore not as dramatic as it might seem, and it was supported by analysis conducted over a period of years, ultimately spurring the momentum for the services, Congress, and the White House to support the birth of the AVF in 1973. Although critics argued that such a force might not be willing to fight, the subsequent success of the 1984 Panama invasion and the outcome of Operation Desert Storm demonstrated that the AVF was a highly effective fighting force.

Table 1, which summarizes and compares incremental and comprehensive change, shows the advantages of incrementalism. Incremental change focuses policymakers on a particular part of a problem for which the information is knowable (or mostly knowable) and for which some standard of effectiveness (the status quo) already exists. In the best case, when a new strategic goal becomes clear, that incremental change can lead to a paradigm shift, such as the one the U.S. military experienced with the advent of the AVF.

Given the pragmatic advantages of incrementalism, it is unsurprising that the FY 2019 NDAA reforms enjoyed a favorable response, while FOTF did not. None of the proposed FY 2019 NDAA reforms—ranging from merit-based promotion sequencing to a new alternative promotion authority—reflect a philosophical shift in thinking. Rather, they suggest a willingness to build on the incremental insights of the past. The small changes spurred by these insights could eventually lead to a paradigm shift in thinking about officer management.

An approach that (at least initially) scales officer management reforms to small populations and avoids implementation of more than one reform at a time could eventually add considerable flexibility to the officer management system. Such an approach, which largely preserves the status quo but allows for the accumulation of smaller changes and insights over time, appears to be the most realistic way to eventually establish a system that breaks with many of the current principles of officer management. Military departments should therefore continue to explore opportunities to embrace the FY 2019 NDAA reforms—with the principles of incrementalism in mind.