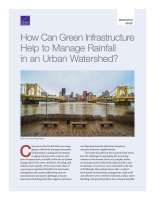 How Can Green Infrastructure Help to Manage Rainfall in an Urban Watershed? 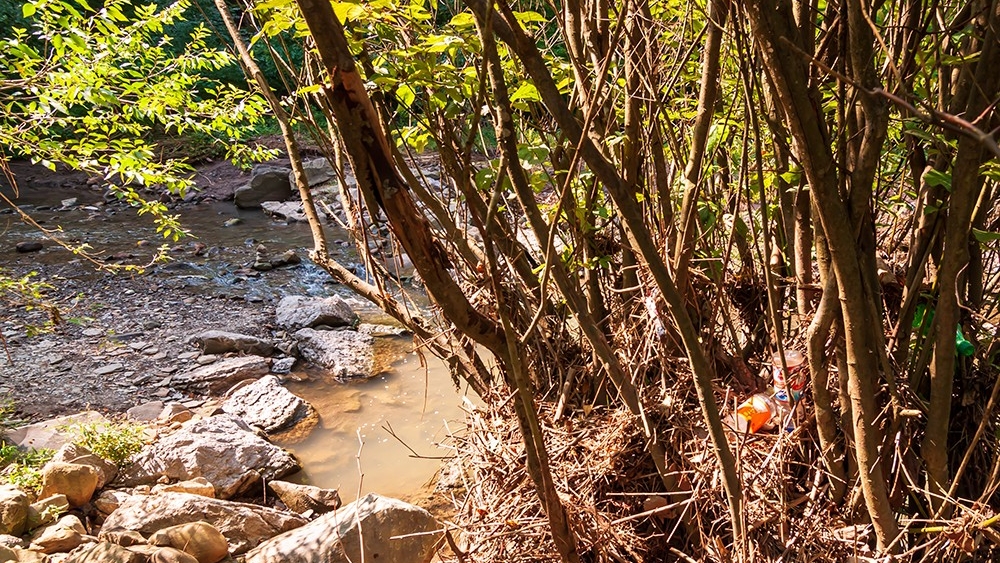 Forest debris and garbage caught in a tree from recent flooding of Nine Mile Run in Frick Park.

Cities across the United States are struggling to effectively manage stormwater. Urbanization, inadequate investment in aging infrastructure systems, and more-frequent heavy rainfall events due to climate change have led to sewer overflows, flooding, and reduced water quality. At the same time, there is a growing recognition that effective stormwater management also means addressing environmental justice and equity challenges, because stormwater flooding and other negative outcomes can disproportionately affect low-income or majority-minority neighborhoods.

The study described in this research brief shows how the challenges in managing the increasing volumes of stormwater flows in a complex urban environment can be effectively addressed by a mix of solutions. Focused on a key watershed in the city of Pittsburgh, this analysis shows that a centralized system of stormwater management could yield cost-effective sewer overflow reduction, reduce street flooding, and provide positive net economic benefits across a range of assumptions about future rainfall and implementation costs.

The Pittsburgh region, including the city of Pittsburgh and surrounding municipalities in Allegheny County, is a prime example of urban stormwater challenges. The region's combined sewer system[1] is inadequately sized to capture and treat most "wet weather" events, which occur frequently throughout the year. As a result, nearly every time it rains, a combined sewer overflow occurs in at least one of the approximately 450 outfalls in the system, draining a mix of untreated wastewater and stormwater into streams and rivers.

A key focus of the public conversation about the Pittsburgh region's stormwater challenges since 2012 has been on green infrastructure. Traditional, or gray, infrastructure includes water treatment facilities, tunnels, pipes, and storage tanks and is often located underground. Green stormwater infrastructure (GSI), by contrast, uses natural elements (e.g., vegetation, soils) to capture stormwater and allow it to either infiltrate into groundwater or slowly release back into a stormwater or combined sewer system well after the storm event peak. In contrast to gray infrastructure, nature-based GSI is intended to provide additional cobenefits to local residents, such as new parks or green space, recreational opportunities, and improved air quality.

Western Pennsylvania's steep topography and clay soils are often cited as barriers to more-significant investment in GSI. However, an alternate approach is to use GSI techniques as part of larger-scale green-and-gray strategies that seek to capture and route rainfall to a centralized surface (or daylighted) system, which includes natural features, such as streams, ponds, or wetlands, and ultimately allows the water to flow directly to rivers or lakes. Where possible, this approach could divert a large volume of stormwater from the combined sewer system entirely, avoiding the need to invest in expensive sewer separation while restoring some amount of natural surface flows across an urbanized watershed.

Negley Run is a large watershed that drains a diverse area of Pittsburgh's East End, including several neighborhoods that have suffered heavily from underinvestment in recent decades, such as Homewood, Larimer, and Lincoln-Lemington-Belmar (see Figure 1). Negley Run captures more water than any other watershed in Pittsburgh and is the single largest contributor of sewer overflow in the region. It also represents one of the most-urgent flood risk challenges in the city. Major rainfall events regularly lead to flash flooding along lower Washington Boulevard, a key roadway corridor that supports a high volume of commuter traffic from suburbs north of the Allegheny River.

Given the range of social, economic, and environmental challenges faced in the watershed, recent local planning efforts have looked to address these problems holistically through investments in GSI. As of 2020, a working group called the Negley Run Watershed Task Force (NRWTF) has regularly convened to help coordinate GSI activities across the watershed. The task force is composed of representatives from key government agencies, neighborhood organizations, environmental nonprofit groups, and local designers and technical experts.

Building closely on a prior pilot effort focused on climate resilient stormwater management in the Pittsburgh region, RAND researchers worked with the NRWTF to identify and evaluate 17 possible stormwater management strategies for Negley Run based on the core concept of a new centralized and daylighted GSI system. Researchers developed strategies using a plan and literature review, design-focused participatory workshops and stakeholder engagement, and formulation and iteration with technical experts. The strategies feature both green (e.g., wetlands, streams, ponds) and gray (i.e., piped) infrastructure, store a large volume of rainfall during and after storms, and provide a new pathway for stormwater to flow directly to the Allegheny River along the Washington Boulevard corridor instead of flowing through the combined sewer system. They also include other amenities, such as a multipurpose recreational trail for walking and biking.

Each strategy is defined by the geographic area it covers and the level of investment to be applied within that area (see Figure 2). There are nine cumulative strategy increments (1 to 9) based on geographic area, where each additional increment also includes the previously numbered increments for the strategy to build "upward" from the bottom of the watershed into the surrounding neighborhoods. There are also three options (A, B, and C) for different levels of investment to be applied within selected increments. Specifically, strategy increments 1 to 4 are derived from preliminary design work for a centralized daylighted system that was developed for the Pittsburgh Water and Sewer Authority and do not include additional investment options. Strategy increments 5 to 9, alternately, are largely drawn from concepts developed by NRWTF and include multiple levels of investment based on local GSI interventions. Local GSI projects, such as bioswales, generally span a city block or less and are designed primarily to hold rainfall and allow it to slowly infiltrate into the ground.

One of the novel contributions of the study was to consider how a restored Silver Lake could function as a key location for storing rainfall. Silver Lake was once a body of water at the confluence of several historic streams. It was filled in after the streams were replaced with combined sewer pipes and is currently a commercial/ industrial park. Returning this location to a lake would provide a sizable basin for water retention during storms and provide a major recreational feature in an area that currently lacks good park access. This restored lake, which we refer to as the Silver Lake Retention Basin (SLRB), is a key feature for strategy increments 5 to 9.

The key findings from each of these steps are in the following sections.

Over a range of recent rainfall events, sewer overflow from Negley Run is higher than in the Typical Year (TY). Assuming no additional investment, researchers estimated that a TY — which represents a single historically based rainfall assumption commonly applied in regional planning — sees 865 million gallons per year of sewer overflow. When comparing the TY estimate with rainfall from the years 2003 to 2017, the researchers determined that annual sewer overflows for those years are approximately 14 percent higher on average. These results show that relying on the assumption of TY rainfall alone to inform infrastructure planning and design will lead to underestimates of combined sewer overflow under present-day or plausible future conditions.

Negley Run already faces notable flood risk from heavy rainfall events. The model showed sufficient flooding to close Washington Boulevard even under a storm with a 50-percent chance of occurring in a given year. The results also suggest that flooding occurs regularly on streets and intersections in Homewood and surrounding neighborhoods. For the areas of Negley Run evaluated for basement flooding, researchers estimated that 11 percent to 18 percent of homes are at risk of a wet basement, a basement sewer backup, or both from a wide range of rainfall events based on historical rainfall conditions.

Flood risk increases with heavier rainfall from plausible future climate change. RAND researchers' modeling shows that key streets and intersections would flood more frequently when considering a projected 2020–2099 future scenario based on climate modeling. Similarly, the number of homes at risk of at least one type of basement flooding increases by 18 percent to 21 percent when comparing an average future climate scenario with historical rainfall conditions.

Watershed-Scale GSI Strategies for Negley Run Could Reduce, Although Not Eliminate, Sewer Overflow and Flood Risks

A new centralized daylighted system and subsequent upstream investments could substantially reduce, but not eliminate, sewer overflows in Negley Run. The simulation model indicates that

Preliminary research did not identify street or basement flood risk reduction benefits from local GSI investments in Homewood and surrounding neighborhoods, but more investigation is needed. The initial strategies tested do not appreciably reduce the estimated frequency or extent of either street or basement flooding in the areas modeled. Additional research will be needed to follow up on these results and determine whether targeted project designs could provide localized risk reduction.

Strategies that build on a daylighted surface collection system could yield highly cost-effective sewer-overflow reduction across a range of assumptions. Modeling suggests that the Central Daylighting strategy would cost $0.04 to $0.14 per gallon of sewer overflow reduced across a wide range of rainfall-uncertainty and construction cost assumptions. This compares favorably with the average cost-effectiveness from other recent local and regional capital investment plans. In general, scenarios with higher average annual rainfall lead to greater sewer overflow cost-effectiveness.

GSI cobenefits from the evaluated strategies could contribute substantial value to residents when accounting for uncertainty and using conservative assumptions. The study estimated a subset of GSI strategy cobenefits from recreation, bicycle commuting, pedestrian activity, tree cover, and overall amenity value. The Central Daylighting strategy is estimated to provide $1.8–$5.4 million in cobenefits per year, while either the Midrange or Max Build-Out strategies would yield $3.3–$9.7 million per year. These benefits, although likely undervalued in the analysis, are sufficient to offset GSI strategy costs under many plausible futures.

The net economic value of the strategies considered is nearly always positive across a wide range of assumptions. Estimates of the net economic benefit (benefits minus costs) over a 40-year planning horizon are strongly positive across nearly all strategy cost, water-quality benefit, and cobenefit assumptions. Taking into account both water-quality benefits and cobenefits, the net benefit ranges from $40–144 million from the Central Daylighting strategy to $31–175 million from the Midrange strategy, with the Max Build-Out strategy yielding a somewhat lower range of $6–169 million (see Figure 3).

A Midrange strategy could provide positive economic benefit across a wide range of assumptions. If local planners were to focus solely on cost-effective sewer overflow reduction, the Central Daylighting strategy appears to be a robust and low-regret approach across a wide range of cost and rainfall assumptions. When taking into account a broader range of cobenefits for local residents in Homewood and surrounding neighborhoods, however, strategies that include an SLRB and additional investments in local GSI, such as the Midrange strategy, outperform the Central Daylighting strategy in the large majority of scenarios considered. 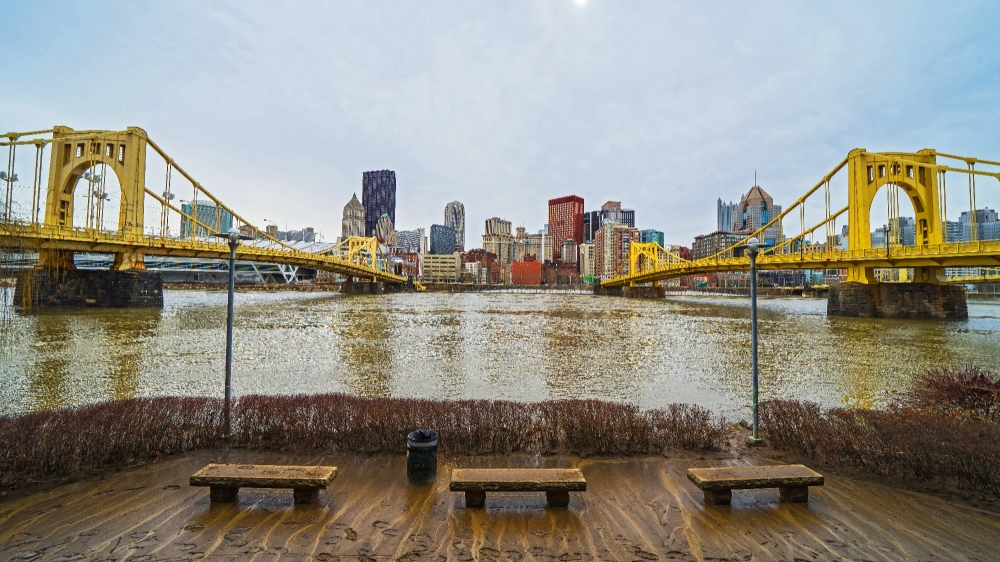 Building on these key findings, the study presents recommended next steps for stormwater planning in Negley Run. These recommendations are directed toward all NRWTF members, but they should be of particular interest to participating local, state, and federal agencies and authorities.