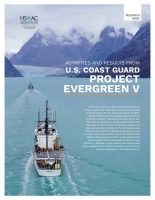 The U.S. Coast Guard has spent the past 25 years trying to predict the challenges it will face over the next 25 years through its long-running Evergreen initiative. The aim of this long-term strategic planning effort is to identify emerging challenges and future trends that might alter the demand for Coast Guard missions and the ability to perform them so that senior leaders can plan and be better prepared for the coming decades.

This brief summarizes the findings of Evergreen V — the most recent four-year initiative — run by the Coast Guard Office of Emerging Policy (DCO-X) with support from the Homeland Security Operational Analysis Center (HSOAC), a federally funded research and development center operated by the RAND Corporation under contract with the Department of Homeland Security.

The HSOAC team designed and supported two workshops and wrote a research report, Developing New Future Scenarios for the U.S. Coast Guard's Evergreen Strategic Foresight Program, that framed a more-deliberate approach to developing scenarios. The report developed the structure for how to create scenarios for robust strategic planning, and the workshops served to identify vulnerabilities and opportunities in Coast Guard strategies while implementing the scenario-based workshop concept.

Scenarios should be robust and diverse rather than predictive. They should stress-test current plans, policies, and capabilities by helping workshop participants better articulate tradeoffs that the Coast Guard will make today to address the wide variety of possible challenges that it might face in the future.

Improvements Made in Response

An improved approach to scenarios. To help participants articulate short-term trade-offs to address long-term challenges, the Evergreen team improved the approach to scenario development. The scenario development was analytically robust and created four diverse plausible futures, each of which was designed to exert various amounts of pressure on key drivers of Coast Guard missions.

Clearer communications. The team began producing short summaries and deeper dives into topics of interest to make the findings more accessible, timely, and useful to Coast Guard decisionmaking. Senior leaders and specific offices were able to understand the themes, opportunities, and concerns raised in the workshops within weeks of the event, and be more informed on complex topics that affect the service.

Years 2 and 3: Workshops and Communications

Using the approach to scenario development created in year one, HSOAC developed four possible futures for discussion in the six Pinecone workshops held in 2019–2021. The scenarios were structured around five levers: geopolitics, the economy, climate, technology, and society. Each scenario had distinct stressors and put varying amounts of pressure on drivers of demand for Coast Guard missions. This resulted in a spectrum of potential futures, ranging from a world characterized by rapid growth, innovation, and U.S.-led cooperation to one plagued by disasters, resource strains, and loss of global influence. The same scenarios, with slight modifications, were used in the six subsequent workshops.

Driving Mission Demands in the Future

Below are highlights of the current and future trends, driven by various phenomena, that will ultimately converge to have a collective impact on the Coast Guard in the 2040 time frame. These are coupled with common themes raised by participants about how these trends could impact the service, or what the service might consider in response.

Demographic shifts. Aging populations will affect recruiting pools and the profiles of those that the Coast Guard rescues; population growth will intensify demand for Coast Guard services.

Workforce and work-arrangement shifts. As long-term employment shifts toward shorter-term engagements and independent contractual work, the Coast Guard might need to accommodate changing expectations and rethink how it recruits, develops, and retains talent.

Changing patterns of energy production and usage. Shifts in the transport volume of coal, oil, and natural gas will affect the types of traffic and facilities that the Coast Guard will regulate and secure. The Coast Guard could also seek to reduce its own usage of fossil fuels.

Changing drug production, use, and legislation status. The types of illicit drug flows that the Coast Guard will need to address over the long term will vary based on policies, changes in demand, shifting sources, and how drugs are routed from their sources to consumers.

Geopolitical shifts. The rise of China, the resurgence of Russia, fragile state control in various regions, terrorist threats, and other geopolitical factors can alter the Coast Guard's emphasis on its various domestic and overseas roles.

Years 2 and 3: Workshops and Communications

Highlights of Key Themes From the Workshops

(A complete list, including more details, can be found in the final report.)

Grassroots innovation and enterprise integration can be at odds. The Coast Guard often develops novel solutions to meet its particular needs, but tailored solutions can hinder interoperability with other stakeholders and steepen the learning curve for personnel. Striking the right balance between innovation and standardization requires constant reappraisal.

There is a need for balance between centralized and distributed decisionmaking. Ensuring alignment across the service can increase interoperability and collective effectiveness, but individual commands also need to be able to tailor policies, approaches, and decisions to meet their specific needs, given their deeper awareness of their operational environment and issues.

There is an inherent tension between localization and the ability of units to deploy. Rooting units in a particular locale has advantages (e.g., connections with neighboring units and agencies, knowledge of an area), but units must be deployable to respond to short-term emergencies and long-term shocks, where localization can be a disadvantage (e.g., cost and effort of deploying; unfamiliarity with environment, agencies, and individuals). Recurring deployments to the same areas can enhance familiarity, but the efforts and costs associated with deployments could limit a unit's capabilities and experience in its home environment, and induce additional strain and burden.

The Coast Guard faces trade-offs between efficiency and resilience. Measures taken to make the service lean and efficient can backfire by making the Coast Guard less resilient and reducing its ability to surge. The Coast Guard needs to invest in skilled personnel, equipment, assets, and infrastructure to meet prospective crises, even if not all elements are used routinely.

The Coast Guard will need additional resources. The Coast Guard's budget will need to increase to address the expectation of more involvement abroad and the growing demand at home, and the increasing cost of equipment sustainment.

In multiple workshops, participants suggested that organizational culture was at the heart of addressing issues that would shape the Coast Guard's future. . . . Some aspects of the current culture will need to be preserved and enhanced, others might serve as barriers to change, and still others are not well-defined and are opportunities to lean in and shape the force.

In year 4, Evergreen shifted from workshops to strategic games. Paratus Futurum ("Ready for the Future") forced players to make distinct choices about mission priorities and investments to prepare for an uncertain future in which climate change, technological advancements, the U.S. economy, and global power competition shape the demand for Coast Guard missions. There were two series of games: a virtual game for mid-grade officers and civilian participants and a second series consisting primarily of senior leaders and flag officers. Participants probed the tradeoffs that must occur to meet national and Coast Guard priorities and to enable Coast Guard leadership to articulate a vision to the public, Congress, the Executive Branch, the Department of Homeland Security, and the Coast Guard workforce. 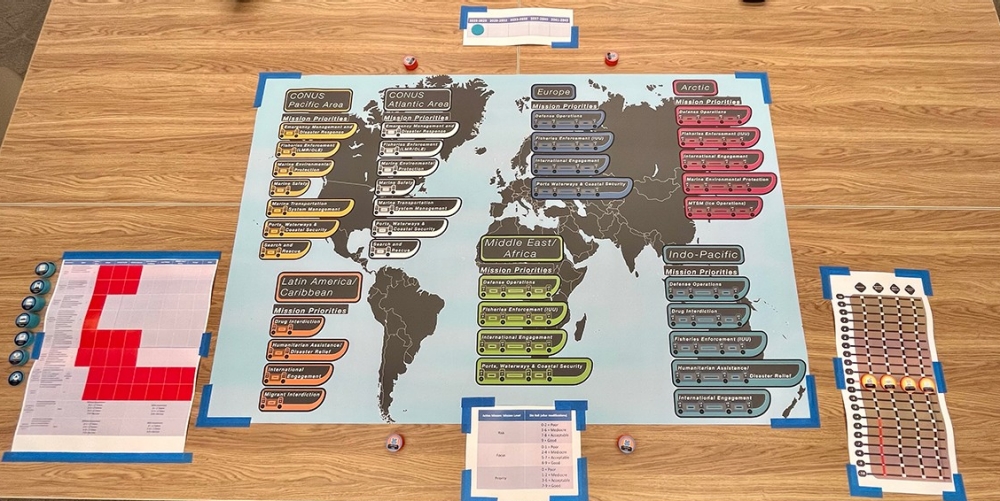 View of the layout of the Paratus Futurum board, set to begin the game.

Expanding access to games across the service can be a relatively low-cost, easily executable approach to ensuring analytic consistency and preparing the workforce to take on the challenges of today and tomorrow.

How Can the Coast Guard Use Gaming? Homeland Security Operational Analysis Center operated by the RAND Corporation, PE-A148-1, 2020.