Wargaming the Defense of the Baltics 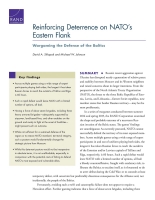 Russia's recent aggression against Ukraine has disrupted nearly a generation of relative peace and stability between Moscow and its Western neighbors and raised concerns about its larger intentions. From the perspective of the North Atlantic Treaty Organization (NATO), the threat to the three Baltic republics of Estonia, Latvia, and Lithuania — former Soviet republics, now member states that border Russian territory — may be the most problematic of these. In a series of war games conducted between summer 2014 and spring 2015, RAND Arroyo Center examined the shape and probable outcome of a near-term Russian invasion of the Baltic states. The games' findings are unambiguous: As presently postured, NATO cannot successfully defend the territory of its most exposed members. Fortunately, it will not require Herculean effort to avoid such a failure. Further gaming indicates that a force of about seven brigades, including three heavy armored brigades — adequately supported by airpower, land-based fires, and other enablers on the ground and ready to fight at the onset of hostilities — could suffice to prevent the rapid overrun of the Baltic states.