This report summarizes research on recent patterns in military-to-civilian conversion — that is, converting military positions to government civilian positions — to identify the primary impediments to such conversions. The authors reviewed relevant statutes and policies, held discussions with U.S. Department of Defense (DoD) subject matter experts, and analyzed administrative data on DoD military and civilian personnel. 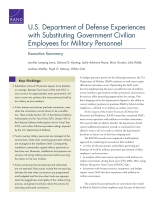 This report summarizes research on recent patterns in military-to-civilian conversion — that is, converting military positions to government civilian positions — to identify the primary impediments to such conversions. While Section 129(a) of Title 10 of the United States Code directs the Secretary of Defense to determine the "most appropriate and cost efficient mix" of personnel required to accomplish the U.S. Department of Defense's (DoD's) mission, a variety of constraints make it difficult to achieve that goal. RAND's assessment drew on three lines of analysis: (1) a review of statutes and policies governing performance of work by military service members, government civilian employees, and contractors; (2) an analysis of administrative data on DoD military and civilian personnel covering the most recent wave of military-to-civilian conversions (fiscal years 2004–2012); and (3) discussions with subject matter experts across DoD. The RAND team concluded that there is considerable opportunity to identify positions suitable for military-to-civilian conversion. However, there are also numerous impediments to authorizing and executing these conversions. The report offers recommendations for changes to statutes, policies, and business practices that would facilitate military-to-civilian conversions and motivate greater use of this force management tool, should that be DoD's goal.

This research was conducted within the Forces and Resources Policy Center of the RAND National Defense Research Institute, a federally funded research and development center sponsored by the Office of the Secretary of Defense, the Joint Staff, the United Combatant Commands, the Navy, the Marine Corps, the defense agencies, and the defense Intelligence Community.