Following California's 2012 bill to enact major reforms to the state workers' compensation system, RAND researchers assess trends in earnings loss and permanent partial disability benefits between 2005 and 2012, including analysis of the Great Recession's impact on outcomes for injured workers, and examine how the reforms might affect injury compensation going forward. 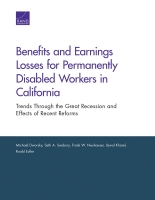 Benefits and Earnings Losses for Permanently Disabled Workers in California

Trends Through the Great Recession and Effects of Recent Reforms

In 2013, California began implementation of major reforms to the state workers' compensation system, which were enacted in 2012 as part of Senate Bill (SB) 863. These reforms included several changes to permanent partial disability (PPD) benefits. To monitor the success of SB 863, the California Commission on Health and Safety and Workers' Compensation (CHSWC) contracted with the RAND Corporation to assess recent trends in earnings loss and PPD benefits and how injury compensation will be affected by SB 863. This report provides early evidence on how these reforms have affected disability ratings and benefits and compares PPD benefits to the earnings losses experienced by permanently disabled workers. Because SB 863 changed benefits in part by modifying the disability rating system, we also evaluate the impact of these changes on the equity of PPD benefits.

We find that permanently disabled workers experience large earnings losses, with earnings reduced by 28 percent on average in the second year following the injury. Workers who were injured during and after the Great Recession of 2008–2009 experienced substantially higher earnings losses than those injured before the recession. Impairment ratings and benefits increased over this period as well, but the fraction of earnings losses replaced by benefits declined between 2005 and 2012 due to increased earnings losses. Increased benefits and ratings under SB 863 will yield replacement rates higher than those observed in 2005 even if earnings losses remain elevated. Impacts on equity were detectable but small.

This study was sponsored by the California Commission on Health and Safety and Workers' Compensation (CHSWC) and conducted by the RAND Institute for Civil Justice, a part of the Justice Policy Program within RAND Justice, Infrastructure, and Environment.