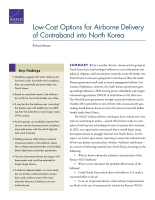 Low-Cost Options for Airborne Delivery of Contraband into North Korea

For a number of years, various activist groups in South Korea have used hydrogen balloons — and, more recently, hexacopter drones — to carry political, religious, and humanitarian materials across the border into North Korea. The balloon delivery techniques have evolved over time, and the activist groups are overtly interested in new technologies to pursue their goals. This report reviews open-source reporting to assess the technical state of balloons and drones as means of delivering material into North Korea. It also compares efforts in Korea with Cold War efforts to achieve similar goals in Central and Eastern Europe and assesses plausible technological developments that might improve the airborne delivery of contraband.

This project is a RAND Venture. Funding was provided by gifts from RAND supporters and income from operations. The research was conducted by the RAND Center for Asia Pacific Policy (CAPP), part of International Programs at the RAND Corporation.