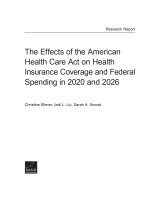 In this report, the authors analyzed a version of the American Health Care Act (AHCA), a bill proposed in the U.S. House of Representatives on March 6, 2017. The bill would have repealed many of the provisions of the Affordable Care Act (ACA) and replaced them with alternative reforms. The authors used RAND's COMPARE microsimulation model to assess how the AHCA would have affected such outcomes as health insurance enrollment, consumer out-of-pocket costs, and the federal deficit relative to the ACA. This analysis relies on the version of the bill dated March 6, 2017, with several updates to account for the March 20 "Manager's Amendment."

Health Insurance Enrollment Would Have Decreased

The research described in this report was funded by the Commonwealth Fund and conducted by RAND Health.