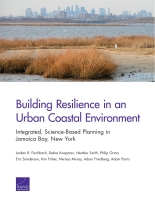 Jamaica Bay, located at the southeastern end of the boroughs of Queens and Brooklyn, is a valuable resource for the City of New York and the surrounding metropolitan region. It was one of the region's most heavily flooded areas during Hurricane Sandy in 2012 and is also highly vulnerable to forces affecting the coast, including sea level rise, storm surge, and wetland degradation. In the years following Sandy, many ideas have been proposed to reduce the bay's vulnerabilities to these forces. But the region lacked an analytical framework for evaluating the efficacy of these various proposals and comparing their merits across the goals of flood risk reduction, improved water quality, and ecosystem restoration. Some proposed interventions have the potential to achieve benefits toward one goal but not necessarily the others, with the potential for significant tradeoffs between them. Without the appropriate tools or analyses, these kinds of assessments and comparisons are far less credible. This project implemented a participatory process with key stakeholders to explore current and future resilience-related concepts in Jamaica Bay. The process was designed to consider baywide concepts that could reduce future flood risk exposure while also improving water quality, restoring habitat in and around the bay, and more generally improving resilience to extreme weather events. The analysis compared conditions in and around Jamaica Bay in the present, considered to be 2016 when the modeling work commenced, and 25 and 50 years in the future, corresponding to the years 2041 and 2066.

Climate change will have a significant impact on natural and human systems in and around Jamaica Bay if no further major investments are made.