Defense reviews are political documents, as much as they are analytical ones. This report traces the post–Cold War history of defense reviews and explores the political dynamics behind their creation. It explains why defense reviews often embrace the status quo; predicts what factors may help develop more-innovative findings; and recommends ways that the services and the Department of Defense can maximize these reviews in the future. 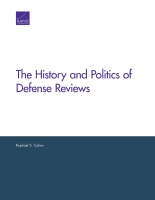 The History and Politics of Defense Reviews

Defense reviews are political documents, as much as they are analytical ones. This report examines three main questions. First, why has the defense strategy process evolved in the way it has? Second, why, despite so much time and effort, do strategies so often come up short? Finally, and most importantly, how can the process change to make for better strategy? Using a mixture of primary and secondary sources and firsthand interviews, this report first traces the history of major defense reviews in the post–Cold War period from the Base Force through the 2014 Quadrennial Defense Review. The report then explores the politics behind these reviews to explain the structural, personnel, and political reasons why these defense reviews often embrace the status quo, and predicts what factors — from budgets to timing to senior-level involvement — may allow a review to develop more-innovative findings. The report concludes with a series of recommendations for the services, the U.S. Department of Defense, and the U.S. government at large to get the most out of these defense reviews. Ultimately, this report argues that defense reviews at their core are as much the product of political compromises as they are objective analysis. Consequently, understanding the politics behind defense reviews can help explain how they evolve, what their limitations are, and how to maximize the process in the future.

This research was sponsored by the Director of Strategy, Concepts and Assessments, Deputy Chief of Staff for Strategic Plans and Requirements (AF/A5S) and conducted by the Strategy and Doctrine Program within RAND Project AIR FORCE.