RAND Corporation researchers performed a quantitative and qualitative assessment of the impact that certain remotely piloted aircraft (RPA), governed by the Missile Technology Control Regime, and their proliferation to U.S. adversaries have on U.S. national security interests and U.S. allies and partners, as well as export controls that might affect that proliferation. In this report, they document their findings. 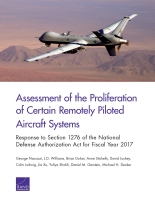 Assessment of the Proliferation of Certain Remotely Piloted Aircraft Systems

The MTCR Is Only One of Many U.S. Control Mechanisms to Which an Export Request Is Subjected

This research was sponsored by the Office of the Chairman of the Joint Chiefs of Staff Directorate for Intelligence and conducted within the Cyber and Intelligence Policy Center of the RAND National Defense Research Institute, a federally funded research and development center sponsored by the Office of the Secretary of Defense, the Joint Staff, the Unified Combatant Commands, the Navy, the Marine Corps, the defense agencies, and the defense Intelligence Community.