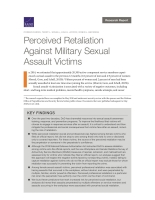 In response to the high and stable rates of perceived retaliation against military sexual assault victims, in 2014, Secretary of Defense Chuck Hagel announced new procedures that would better prepare commanders, junior officers, and supervisors to "reduce the potential for retaliation."

This resolve was echoed by the U.S. Congress, which included in the National Defense Authorization Act for fiscal year 2016 a directive to create a comprehensive strategy to prevent retaliation. The resultant DoD Retaliation Prevention and Response Strategy includes the goal of "creating a culture intolerant of retaliation" and plans to "hold supervisors and leaders appropriately accountable for preventing, detecting, and addressing retaliatory behavior." To guide this effort, it may be helpful to better understand the situations in which retaliation against military sexual assault victims is most likely to occur. Although fear of retaliation is often identified as a barrier to reporting sexual assault, little is known about the predictors of retaliation when it does occur. This research documents the characteristics of sexual assault incidents, victims, and perpetrators that increase risk for perceived retaliation against service women who have been sexually assaulted. Because telling others about the sexual assault increases the number of people who know about the assault and thus may retaliate against the victim, the authors also explored the relationship between disclosure choices and retaliation and subsequently controlled for disclosure choices when identifying risk factors for retaliation.

Perceived retaliation against victims is highest when an official report is filed, but silence does not preclude retaliation

This research was sponsored by the Office of the Secretary of Defense, Sexual Assault Prevention and Response Office, and conducted within the Forces and Resources Policy Center of the RAND National Security Research Division.