The New York State legislature is considering single-payer legislation — the New York Health Act — that would create a state-sponsored single-payer health program called New York Health to provide coverage to all residents of the state. This report's authors assessed how the plan would affect health care utilization and costs in the state, estimating its effects on key outcomes and comparing them with future outcomes under the status quo. 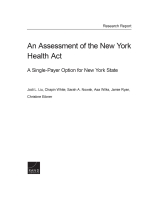 An Assessment of the New York Health Act

The New York State legislature is considering single-payer legislation — the New York Health Act (NYHA) — that would transform the landscape of health insurance coverage and financing in the state. The NYHA would create a state-sponsored single-payer health program called New York Health that would provide coverage to all residents of New York State. Health benefits under the plan would be comprehensive, including all benefits covered by Medicare, Medicaid, Child Health Plus, and those mandated under the Affordable Care Act; the exception is long-term care benefits that would not be covered under the NYHA initially but could be added later. Patients would have no deductibles, copayments, or other out-of-pocket payments at the point of service for covered benefits.

To understand the near-term and longer-term impact of the single-payer proposal, the report's authors assessed how the plan would affect health care utilization and costs in the state. They used a microsimulation modeling approach to estimate the plan's effects on key outcomes and compare them with outcomes under the status quo for three future years: 2022, 2026, and 2031. Based on this analysis, the authors estimate that the NYHA could expand coverage without substantial increases in overall health care spending: in the short term, health care spending would be relatively similar if administrative costs are reduced and would grow more slowly over the longer term than under the status quo if provider payment rates are restrained. However, the NYHA would require new taxes and shift financing among households and businesses.

The NYHA would require large shifts in the types of payments people make for health care.

The research described in this report was commissioned by the New York State Health Foundation (NYSHealth) and conducted by RAND Health.