Demographic differences between the U.S. Department of Defense (DoD) and the civilian workforces prompted a formal analysis of workforce differences in and potential barriers to representation of women in the DoD workforce. This report represents an exploratory effort examining the relatively low level of women's representation and testing the utility of alternative methods in better understanding workforce dynamics. 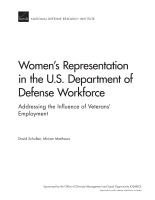 Women's Representation in the U.S. Department of Defense Workforce

Addressing the Influence of Veterans' Employment

To indicate where barriers to equal employment opportunity might be amenable to personnel policy changes, U.S. Equal Employment Opportunity Commission regulations direct federal agencies and departments to compare their workforce demographics with those of the civilian labor force (CLF). Persistent discrepancies between employees who work for the U.S. Department of Defense (DoD) and those in the CLF prompted a formal analysis of these workforce differences and potential barriers. This report represents an exploratory effort examining the relatively low level of women's representation and testing the utility of alternative methods in better understanding workforce dynamics.

Many longstanding policies explicitly favor employing veterans in the federal government. The fact that most veterans are men creates the possibility of a trade-off between goals for employing veterans and Equal Employment Opportunity Commission workforce demographic goals. The researchers for this study assessed both static and long-run representation with changes in hiring practices, as well as with varying retention levels.