The group of high school graduates who did not enlist immediately after graduation but later join the Army has made up a significant and increasing portion of total enlistments. This report presents the results of a survey of 5,000 Army recruits designed to answer questions about why they did not immediately enlist and why they later chose to do so. 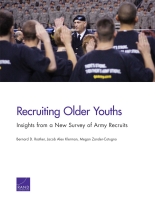 Insights from a New Survey of Army Recruits

Since the advent of the all-volunteer force, little attention has been paid to high school graduates who do not enlist immediately after graduation, primarily those who seek employment in the private sector of the economy. However, over time, this group has made up a significant and increasing portion of total enlistments. However, since 2005, the majority of the Army's recruits has not joined directly out of high school but has instead made the decision to join at a later time. Why these recruits initially chose not to join when they had the opportunity after graduating from high school and why they changed their minds several years later and enlisted are the subjects of this report. Given the importance of older recruits to the Army, the authors examine what is known about these recruits, their performance during military service, and why they came to join the Army after first choosing another postsecondary path. The results of a survey of 5,000 Army recruits designed to answer this question are presented. Finally, the implications of the survey results are discussed, along with suggestions of ways to gain additional insights by tracking this survey cohort through their Army careers.

Others Were Concerned About Current Commitments Overseas

Those Who Enlisted Later Were Concerned About the Job Market

They Were Also Less Concerned About External Factors