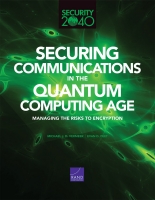 Managing the Risks to Encryption

Does not include Appendixes C and D.

The world is waiting for the first quantum computers, which are expected to revolutionize computing. Their unprecedented power may also enable them to crack the digital encryption system upon which the modern information and communication infrastructure depends. By breaking that encryption, quantum computing could jeopardize secure communications, financial transactions, and the support system for the global economy.

The authors of this report explore those risks by assessing, first, how quickly quantum computers are likely to be developed; second, how quickly encryption that can withstand attacks by quantum computers, or postquantum cryptography (PQC), is likely to be standardized; and third, how quickly and widely PQC will be adopted. The analysis concludes that the threat to the security of the modern communications infrastructure is urgent but manageable, and the authors offer recommendations to the U.S. government for responding.

There is already a race among nations and corporations attempting to develop quantum computers (primarily in the United States, China, and the European Union), and many expected commercial applications are unrelated to cryptography. Quantum computers capable of undermining current cryptography are likely at least a decade off, but they are already introducing risks, and these risks will grow over time.

To assess these timelines and associated risk, the authors undertook a mixed-methods approach consisting of a literature review, a review of expert opinion, and a broad consumer survey to assess the likely events, risks, and uncertainties and recommend appropriate policies and risk-mitigation actions.

Expert predictions of the advent of quantum computers vary widely

PQC standards are only a few years off, but implementation might happen too slowly to avert security losses

Funding for this philanthropically supported research was provided by gifts from RAND supporters and income from operations. The research was conducted by the Center for Global Risk and Security within International Programs.