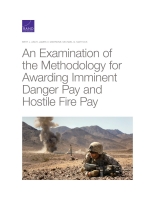 To recognize the risks faced by service members in the line of duty, the U.S. Department of Defense (DoD) offers combat, hazard, and other risk-related pay supplements and benefits to eligible personnel. In the National Defense Authorization Act for Fiscal Year 2019, Congress expressed concern about whether the process for awarding hostile fire pay (HFP) and imminent danger pay (IDP) is effectively meeting the needs of service members in the current operational environment. In this report, RAND researchers examine the methodology for awarding HFP and IDP and explore whether a different approach, such as one based on deployment or operations, might be more effective and efficient. The researchers conclude that the process is generally effective; however, it could be improved by allowing IDP rates to vary with the severity of threat in a location but not by basing the rates on deployments. Among other things, the researchers recommend that DoD create tiered rates of IDP based on severity of threat, increase the current monthly rate for HFP and IDP, and institutionalize regular periodic reviews of IDP designations.

This research was sponsored by the Office of the Deputy Assistant Secretary of Defense for Military Personnel Policy and conducted within the Forces and Resources Policy Center of the RAND National Defense Research Institute.