The growing cruise and ballistic missile threat to U.S. Air Force bases in Europe has led to a reassessment of defensive options, including ground-based systems currently assigned to the Army. The gap between this threat and the U.S. capacity and capability to counter the threat is particularly worrisome. This report offers alternative courses of action for Air Force consideration and assesses strengths and weaknesses of each. 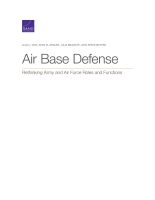 The growing cruise and ballistic missile threat to U.S. Air Force bases in Europe has led Headquarters U.S. Air Forces Europe to reassess defensive options, including active ground-based systems that are currently assigned to the Army. The gap between the cruise missile threat and the U.S. joint force's capacity and capability to counter the threat is particularly worrisome. Constraints on resources and Army prioritization of mobile short-range air defenses for forward forces suggest that shortfalls in air base air defenses are likely to continue unless U.S. Department of Defense force planning and posture decisions give higher priority to these point defenses. This report presents a broad assessment of the threats, defense options, and constraints. The authors offer alternative courses of action for Air Force leadership and assess strengths and weaknesses of each. Although the U.S. Army has been assigned the mission, that mission is not a priority for the Army, as reflected by the lack of dedicated forces. The Air Force is increasingly interested in acquiring its own ground-based air defense but does not believe it has the authority to do so.

This research was commissioned by then–Brig Gen Charles Corcoran, Director of Operations, Strategic Deterrence and Nuclear Integration, Headquarters USAFE and Air Forces Africa, and conducted by the Strategy and Doctrine Program within RAND Project AIR FORCE.