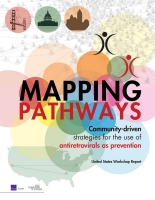 Community-driven strategies for the use of antiretrovirals as prevention: United States Workshop Report

Launched in 2011, the multi-national Mapping Pathways project provides a community-led, research-driven, multi-layered synthesis about the use of antiretroviral-based prevention strategies. Project partners included RAND, AIDS Foundation of Chicago, AIDS United, Desmond Tutu HIV Foundation, Naz India, and Bairds CMC. After two years of data collection and analysis in the United States, South Africa and India, we published a synthesis in a report titled Mapping Pathways: Developing Evidence-Based, People-Centred Strategies for the Use of Antiretrovirals as Prevention.

In the latter half of 2013, a subset of the Mapping Pathways team from RAND Europe and AIDS Foundation of Chicago conducted a series of three "knowledge exchange" scenario development workshops with a focus on the United States, held in San Francisco, California; Atlanta, Georgia; and Washington, DC. The aim of the workshops was to further share the findings of the report and to continue enhancing the community-driven, locally informed approach to the wider evidence base for ARV-based prevention.

This report summarizes the outputs of those three workshops. The intended audience extends beyond those who attended the workshops, to interested policymakers, researchers, community members, advocates, activists, and other stakeholders in the HIV community. We aim to provide a report that is thought-provoking and one which will stimulate new ideas and thinking amongst local, national, and global communities engaged in HIV prevention.

The research described in this report was conducted by RAND Europe.