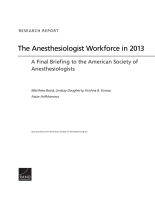 The Anesthesiologist Workforce in 2013

A Final Briefing to the American Society of Anesthesiologists

Important changes are taking place in the health care sector that have implications for future supply and demand of anesthesiologists, including expansion of coverage, an aging population, greater movement of women into the physician workforce, increasing cost pressures, and shifting modes of delivery. To determine what the implications of these changes might be for the anesthesiologist workforce, RAND Corporation researchers conducted a national survey of American Society of Anesthesiologists (ASA) members, who include more than 90 percent of all practicing anesthesiologists in the United States. This survey was a follow-up to a 2007 survey, also conducted by the RAND Corporation. The authors document large and persistent regional differences in anesthesiologists' practices. In addition, there were several large differences by gender. With regard to shortage, the survey reveals substantial evidence for variation in anesthesiologist shortages across states, from which the authors argue that certain areas of the country are experiencing shortages. However, the national level of shortage has decreased since 2007 by approximately 2,000 full-time-equivalent anesthesiologists. The authors estimate that midwestern and western states were more likely than states in other regions to have a shortage of anesthesiologists in 2013.

The research described in this report was sponsored by the American Society of Anesthesiologists and was produced within RAND Health, a division of the RAND Corporation.